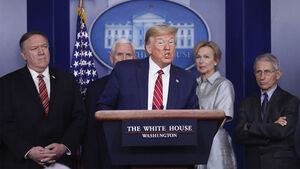 From top: US President Donald Trump (centre) during a Coronavirus Task Force news conference in the White House; Corona is replaced by ‘Chinese’ in President Trump’s script;  Derek Mooney

According to the haggard old proverb: “even a stopped clock is right twice a day.”

The current US President can only dream of attaining even this level of accidental consistency.

After months of denying the threat posed by Coronavirus, even to the point of putting the blame for its arrival in the U.S. on “the Democrat policy of open borders” (See this NYTimes timeline of Trump’s statements) the current U.S. President seems, finally, to have had the realisation imposed upon him that Coronavirus is a real and present danger.

Not that something as hazardous or deadly serious as the worst global pandemic in a century is going to stop Trump from scoring political points.

Along with changing his messaging, Trump has also changed his language. Up to two weeks ago – when he was still denying the seriousness of the situation – he was content to call the threat by its proper name: Coronavirus or Covid19.

No longer. Now that the public spotlight has turned on to the weeks and months of his administration’s negligence and indifference Trump has found a new name for the disease: the Chinese Virus.

They show the word ”Corona” crossed out from the official typed script and the word ”Chinese” put in its place, in what looks like Trump’s trademark sharpie handwriting.

When challenged by reporters about his repeated use of the phrase and asked if he thought this was racist, Trump said:

“It’s not racist at all, no, not at all. It comes from China, that’s why. I want to be accurate. …I have great love for all of the people from our country, but as you know China tried to say at one point … that it was caused by American soldiers… It comes from China.”

Though he probably does not know it, Trump is resurrecting an age-old trope. One with origins in a sexually transmitted infection!

Back in the 16th and 17th centuries, countries hit with a syphilis infection blamed enemy countries for the outbreak. Italians, Germans and English called it ‘the French disease’.

Whatever the etymology, you don’t need a masters’ degree in political science to work out Trump’s intention. He wants… no, in this election year… he needs, to distract from the glaring inadequacy of his failed response by shamelessly and recklessly scapegoating an entire race.

He does not care one jot that his crass politicking is fuelling and licensing racism and xenophobia, all he cares about is getting the focus off him.

It is his standard operational response where he feels politically threatened or in electoral danger. He finds a target, preferably a minority group or race, on which he can pin blame, no matter how ludicrous. The fact that racism is his first go-to-response in these situations tells us as much about the state of race relations in the US as it does about Trump.

The problem in this case is not that he is right, he clearly isn’t, but that his crude politicking is deflecting from a valid point, namely that the negligence and indifference of the Chinese State authorities, and that means the Chinese Communist Party, made this situation worse.

A regional infection quickly became a global pandemic as a consequence of their two-step strategy of blanket denial and blame avoidance.

Beijing’s initial response was no less crass or ignorant than Trump’s. When the late Dr Li Wenliang posted warnings, on a medical group-chat in December 2019, of a virus hitting Wuhan which he thought resembled Sars; he was told by police to “stop making false comments” and reprimanded for “spreading rumours”.

Dr Li’s death of Covid-19 in early February sparked public outrage in China. The volume of online posts blaming the Chinese Communist Party was so great that China’s internet censors were overwhelmed. The Communist leadership saw that blank denial was not working. They switched tack and launched an anti-corruption agency investigation ”…into the problems reported by the public concerning Doctor Li Wenliang” .

The investigators published their report late last week. A classic …on the one hand, but on the other… whitewash. They found Dr Li was a professional who fought bravely and made sacrifices.

They withdrew the reprimand but said his findings were “not consistent with the actual situation at the time”. The only action recommended was to name and shame the police who reprimanded Dr Li for not following correct procedures.

Needless to add the report is being met with as much anger as the news of Dr Li’s death. Meanwhile, and this is where the Trump stopped clock comes into play, official Chinese government spokespeople, notably Lijian Zhao, Deputy Director General of China’s Information Department, have been busy doing to the United States what Trump is doing to China.

Zhao is the official cited by Trump as saying that US troops were responsible for the Coronavirus outbreak.

Zhao’s Twitter timeline is so crammed with disinformation, lies and propaganda it would make a Shinnerbot blush.

Included are links to #FakeNews sources claiming US military participation in the World military games in Wuhan was behind Coronavirus. One says:

At the 7th Military World Games (October 18-27, 2019) held in Wuhan, why did the U.S. team (369 members) win ZERO gold medal? Did that even look like a reasonable record for the world’s leading military power?Did your government do it on purpose? Was anyone among the 369 participants ever (mis)diagnosed with influenza? Was it possible they were carriers of the novel coronavirus? The best thing for the U.S. now is to stop burying its head in the sand and give the 369 people PCT tests to see if they are infected.

China is not the only authoritarian regime more driven by avoiding public panic and retaining their own authority, than with public health and safety.

Neither is it the only one engaged in a propaganda battle to cover its own negligence. Russian political activist Garry Kasparov castigated CNN on Saturday for unquestioningly accepting Putin’s propaganda that Russia’s infection numbers are low, saying:

“the Russian numbers are “low” because they are lying. They are always lying until proven otherwise. They don’t take down misinformation, they take down the truth. I’m furious”.

In terms of both intent and effect there is no difference between what either Trump, Xi or Putin have done.

Though it is clear Coronavirus started in China and is not some conspiratorial plot, when it comes to those impacted it does not matter where Coronavirus originated.

Trump, Xi Putin… and others have jeopardised the health of their own people and, in this era of globalisation, that means they have risked ours too.

31 thoughts on “Derek Mooney: It’s A Virus, Not A Political Tool. Call It By its Name”