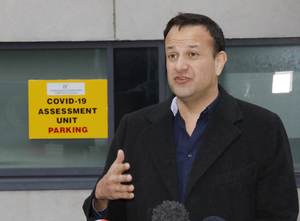 Taoiseach Leo Varadkar will be live in studio to bring all the very latest developments to viewers regarding the ongoing crisis.

Picture This  will be in studio to perform a number of songs,

Normal People actor Paul Mescal will be chatting to Ryan about being catapulted to fame with his portrayal of Conall, as well as those sex scenes.

Evanne Ní Chuilinn, Henry Sheflin, Aidan O’Shea and Kieran Donaghy, will chat to Ryan about how the GAA community has pulled together during the current crisis.

Ryan will also catch up with Tom Cullen, the little boy who stole hearts with his Nanny Pat on The Late Late Toy Show last November…

11 thoughts on “Staying In Tonight?”