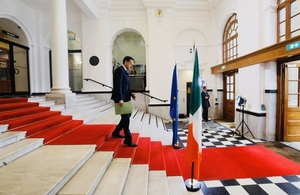 Taoiseach Leo Varadkar announced that the current Covid-19 movement restrictions will remain for another two weeks.

However, from next Tuesday, May 6, 2020, the 2km limit for exercise and non-essential travel will be increased to 5km.

Also from Tuesday, he said people who are “cocooning” will be able to go for a walk or drive within 5km, as long as they “avoid all contact” with other people.

The “plan to reopen the country” is a five-stage plan, involving three-week blocks, starting on May 18 with the fifth phase starting on August 10, he said.

He mentioned that “not long from now, some summer night, we will see our friends again” and that “in later phases” other workplaces, including pubs, cinemas and gyms, will open.

He said schools and colleges will reopen in September/October.

At the outset, Mr Varadkar said the “curve has been flattened and has now plateaued” before saying “we’ve not yet won this fight”.

At the end of his address, he said he’s received about 10,000 pieces of correspondence and “everyday” he tries to set aside time to read some of them.

He recalled letters he got from Jessica, a wheelchair user “who feels an enormous cloud of loneliness around her”; a letter from healthcare worker Anne-Marie who contracted Covid-19 at work who said her patients were like family; a letter from pensioner Phil who lives alone whose mental health is starting to suffer.

He also said he got a letter from Rachel, aged 13, who is worried about her grandparents and wondering when she’ll be able to go back to school. “Someone worried about her future but who ends her letter asking me to stay safe,” he said.

Previously: “The Is The Calm Before The Storm”

With reports of people in Direct Provision and emergency accommodation being locked inside these state-funded institutions that are profiting off them during a pandemic, Ireland’s caretaker leader refuses to allow media questions after a national address on restrictions. https://t.co/5CvJKq5Wdc

Previously: Locking Down Our Liberties