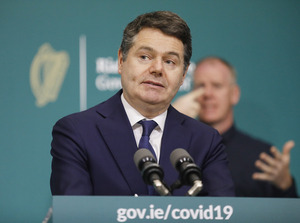 The Minister for Finance Paschal Donohoe (above) was interviewed by Bryan Dobson. It followed his department saying that it expected Ireland to run a deficit of at least 7.5 per cent or €23 billion this year.

Bryan Dobson: “The supports that are available to people who are losing their jobs or are on short time payment, the pandemic payment, unemployment payment. And the wage subsidy – more than a million people now receiving some sort of payment from the State and it expires in the middle of next month. Will it be extended?”

Paschal Donohoe: “Well, we’re going to be dealing with this now across the next few weeks, Bryan. And then we’ll be in a position to outline a pathway for both of those payments. They are going to continue in a form but the level of those payments and how they will be made available to the economy is something that the Government will make a decision on soon.

“The reason why we need to be careful about these payments is two-fold. The first one is they’re working, they’re working keeping people in a job or if you have lost a job, they’re working in helping our citizens cope with huge change in living standards that nobody was expecting.

“The second reason we have to take care with their future is because of their cost. They are costing many hundreds of millions of euros per week and what I and the Government will aim to do is change those payments in a way that is affordable but also makes sense for our citizens.”

A Refusal To Hold Themselves Accountable [Updated]

6 thoughts on “‘We Need To be Careful About These Payments’”