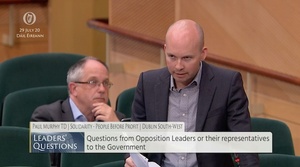 In the Dáil, during Leader’s Questions.

Independent TD Paul Murphy asked Taoiseach Micheál Martin about the Minister for Employment and Social Protection Heather Humphreys’ announcement (see below) ten minutes before Leaders’ Questions that Covid-19 Pandemic Unemployment Payment recipients will not have their pay cut if they travel to green-listed countries.

During her announcement she also said that she has ordered that all cases where PUPs were cut will be reviewed.

However, she said for people who travel to countries not on the green list, “persons can travel for essential reasons only, for example, if you’re going to a non-green list country, it must be for essential reasons such as a bereavement or for health reasons. If you inform your Intreo office in advance, your payment will not be impacted.”

Mr Murphy said the announcement had left penalised PUP recipients wondering if their docked pay will be reinstated and asked for clarity.

He also said that he believes the announcement is on foot of the Free Legal Advice Centre claiming the cuts were illegal – as there has been no legal basis for the cuts.

Mr Murphy also asked the Taoiseach to explain the legal basis that gardai had when they approached a man [Ciaran Cooney] in Dublin Airport on May 7th, told him they were carrying out an ‘immigration check’, only for the man to later learn his PUP was stopped.

The TD asked what legal basis the gardai had to ask for his passport but also what legal basis did they have to transfer data about the man to the Department of Employment and Social Protection – as believed by Mr Cooney.

Mr Cooney’s payment was reinstated after his local TDs Brian Stanley, of Sinn Fein, and Carol Nolan, an Independent, made representations for him.

“But if there was no legal basis then, there’s still no legal basis now for this discrimination now because the statutory instrument of the 10th of July, explicitly only relates to jobseekers, it does not reference the PUP.”

During his response, Mr Martin didn’t give clarity but repeated that people whose pay was cut can seek a review. He said:

He also added that the checks will continue and said he had already outlined the department’s legal basis [however neither Mr Martin nor any other politician has clarified the ‘reasonable grounds’ upon which a garda can approach a person at an airport or port irrespective of the Coivd PUP/social welfare payment].

Mr Murphy, frustrated at the lack of clarity, then asked the Taoiseach again to clarify:

“Are PUP recipients who go on holidays 1) to a green-list country 2) to a non-green list country…will they be penalised?”

He also asked that will people who were wrongly penalised have the money reimbursed.

Mr Martin spoke for the next minute and 20 seconds but didn’t answer either question. Leaders’ Questions then came to a close. Now, @HHumphreysFG says people on the Pandemic Unemployment Payment won’t have their payments stopped if they travel to countries on the #Greenlist #Dail #PUP pic.twitter.com/1FTgzjx5GX

Minister for Social Protection Heather Humphreys (above) said she will sign a regulation that will allow people receiving Pandemic Unemployment Payment and Jobseekers’ Allowance to travel to green list countries without having their payments halted.

The minister also said she has directed her department to review all cases to date where people who went on holiday had their payment stopped.

Under legislation passed in the Dáil last night, anyone in receipt of the Pandemic Unemployment Payment must be “genuinely seeking” employment.

Back In The Saddle

‘Where Is The Compassion?’