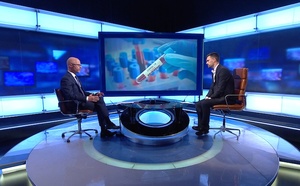 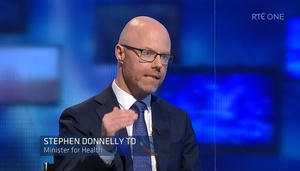 Minister for Health Stephen Donnelly interviewed by Mark Coughlan (top right) attempted to explain the logic behind the the new Covid measures.

Stephen Donnelly: “If you look around Europe and if you look at the amount of cases per population, we’re exactly mid-table. Unfortunately we have one of the highest growth rates of the virus anywhere in Europe. And so what we’re doing is we’re saying ‘let’s act now…let’s act before we’re closer to the top of that table and before we need to make much more serious restrictions’.”

Mark Coughlan: “So what’s gone wrong? How did we get here?”

Donnelly: “I don’t think it’s a question of what’s gone wrong. We’re dealing with a vicious, deadly and highly contagious virus. And what’s happening here is happening all over the world. In Europe but further afield, we’re seeing it in South Korea, in New Zealand and in other places. The broad pattern is: there was a surge here and other places, very harsh and restrictive measures were used, they worked…”

Coughlan: “They were supposed to give us time to implement a system that would allow us to control the virus…”

Coughlan: “And we had that time, did we not?”

Donnelly: “Yeah, yes, and I think this is that. So controlling the virus is rapid testing and tracing. We had about 52,000 tests last week. We’ve a massive upswing in testing now so we’re doing testing right around the country for meat processing plants, for direct provision, for nursing homes. I’m meeting the HSE tomorrow to see how we can get quicker and quicker. We’re increasing enforcement powers. The Minister for Justice and myself are working on that.

“And what we’re doing now is that we’re going to take very targeted measures, not the broad and very severe measures that were taken in the past, we’ve learnt about this. We’re moving quickly. In order to make sure we get the schools up, in order to make sure we get health services open. In order to save lives and in order to protect jobs because we all know that if we end up in a second serious national lockdown then the consequences, personally, for our communities and for our economy would be very, very serious.”

Coughlan: “You spoke about testing and tracing now. Why are we still trying to speed that process up? Surely that should have been properly in place by now?”

Donnelly: “Well, I don’t think we’ll ever stop trying to speed it up. Our testing…”

Coughlan: “But we were talking about 24-hour turnarounds back in, I think, May and we’re still looking at 72/three-day turnaround times. Why aren’t we at a 24-turnaround?”

Donnelly: “So we are, from test, from someone getting a swab to getting a result. Has there been something of a lag when we saw an awful lot of cases appear very quickly, there has and the HSE has been working very hard on that.”

Coughlan: “That was supposed to be the capacity?”

Coughlan: “Yet we saw a slowdown.”

Donnelly: “We did, so the capacity is there for 100,000 – that’s what means we can respond and say ‘we’re doing all meat processing plants’, ‘all direct provision’, ‘all nursing homes’. What we did see was a very low level for about a month, about 20 cases a day. In a matter of days, that shot up to many, many times that. We didn’t have the resources in place to instantly respond to that. It did take two or three days longer.”

Coughlan: “But you knew factories were a risk at the time? For the last few months, we’ve known factories were at risk. The whole system was supposed to be agile and robust to respond to incidents like this. And yet, you just said yourself, it didn’t.”

Coughlan: “But it slowed down.”

Donnelly: “It did slow down and we’re looking at making sure that doesn’t happen. But if you compare us to some other countries. Take New Zealand, New Zealand is held up as a paragon of success in all of this. New Zealand’s target time is five days. Our target time is three days and we’re looking at reducing that. The HSE has done amazing work. One of the things that happened was with a very quick upswing. There weren’t some of the clinicians in place to make the calls as quickly as we would have liked. Why? Because they’re clinicians who were pulled from their own frontline work. They were rightly redeployed. However, the HSE is working on a more permanent system that doesn’t require pulling other clinicians in.”

Coughlan: “When will that be in place?

Donnelly: “We’re working on it right now. I’m meeting them tomorrow and they’re already making improvements to it so…”

Coughlan: “So if there’s another surge in the next week, will it be ready? Or is it a month-long thing or?”

Donnelly: “No it’s happening already. So there’s a whole team in UCD has been stepped up. There’s a team in UCC who’s being stepped up at the moment so that capacity is being put in place very quickly. Would we have loved to have seen no lags when we saw the outbreaks in some of the Midlands? Sure. But as with every other country, we are learning as we go. And I think the HSE made a very reasonable decision to redeploy clinicians to their day jobs when the cases were low and they pulled them back in quite quickly when the cases shot up.”

Donnelly: “What we want to do is we want to say, look, it’s clearly no longer enough to say ‘we need everyone to follow the guidelines’. We all know that there are more and more house parties happening. And unfortunately nobody wants to be the guy that says ‘stop the house parties’ but unfortunately, the data that the public health doctors have is unambiguous and that it is causing a spread.

And whilst maybe the people at these parties are not at risk themselves, although they could well be, it’s entirely possible that they’re then carrying the virus to people who are at risk. So the decision we’ve taken is to say in cases like this or in cases where we have bars that are clearly just not obeying the same guidelines that the vast majority of the country obey, we are moving from recommendation and guidelines to enforcement powers and I think that’s the right thing to do and I think the public want to see that. Because we are asking everybody to make sacrifices again and again and again. We can’t have a situation where a very small group of people say ‘you know what…'”

Donnelly: “We will take a look. Primary legislation obviously takes a bit of time and we will be looking for the co-operation obviously across the political spectrum. The timing on that hasn’t been worked out but the message we’re sending out is this: is that while the vast majority of people are complying which is why we’re still mid-table in Europe and not in a worse situation, we can’t have situation where a small number of people essentially thumb their nose at everybody else. And we’re saying, ‘look, from now on, we are, as quickly as we can, we’re gonna bring in enforcement powers and that does require primary legislation’.”

Coughlan: “So all this is to try and bring the incidence rate down essentially, isn’t it, in the country? So it takes a while for all the cases to process through the system, several weeks. Yet in two weeks time we’re sending everybody back to school or to college. Is there not a contrast there or a difficulty in all that?”

Coughlan: “And that’s what the local lockdowns in Laois, Kildare and Offaly were supposed to do too and seeing as we are where we are today, that obviously didn’t have the effect you were hoping it would have. Is there any situation in two weeks’ time, you’ll reconsider opening the schools?”

Donnelly: “Well, first of all…”

Coughlan: “Is there an incidence rate, is there a kind of a high bar or anything like that, that the Government has even discussed or considered or is it schools will reopen, whatever happens?”

Coughlan: “Briefly, there was a lot of discussion earlier today about over 70s and new measures to be brought in, from my reading of it, the new measures are essentially, you know, limit your contacts, stay indoors as much as possible, is there anything that’s actually new in it that they should be thinking about or considering?”

Donnelly: “Yeah, there was reporting today which was simply incorrect and scared a lot of people. A lot of elderly people, I was talking to colleagues, Oireachtas colleagues, they said, they were getting a lot of phone calls from a lot of very worried and very angry people over the age of 70 saying ‘are we about to be locked into our homes?’, that is absolutely not the case, it was not the recommendation from NPHET and it was not considered by government.

“Let me try and paraphrase the Chief Medical Officer when he was asked exactly this because what you’re asking is public health advice. Essentially, what he was saying is people who are vulnerable to this virus, be it based on age or an underlying condition need to exercise very careful judgment over the next 26 days. The prevalence rate is higher than we want. We had it down to about 3 per 100,000. It’s now up, I think, at 26 per 100,000. That is a rate that causes serious risk for people. It is in the community more than it was and so the advice to people over 70, the advice to people who are more vulnerable to this is: exercise caution.

“So, for example, if you are planning on going on a holiday, on a staycation and you’re over 70 with an underlying condition, there’s no issue with that whatsoever so long as you’re limiting your social interactions…and to be honest, everything I have seen shows that those who are more vulnerable to this have been very seriously following the guidelines. Really, it’s a reiteration of that: to be very, very careful while the rate is where it is.”

That Would Be An Epidemiological Matter

31 thoughts on ““Is There A Magic Number For Schools, Pubs Or Anywhere Else? There Isn’t””