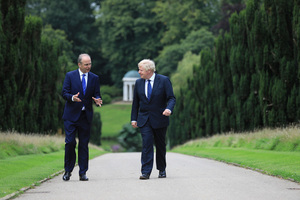 It was a week of dead cats and ducks.

Prime Minister Boris Johnson slammed his breaking international law in a very specific and limited way dead cat on the table, in the hope that others would be so horrified they’d forget entirely that his government hasn’t the slightest clue what happens when Brexit transition ends.

As for the dead duck… well, as I discussed that at length last week, I will comment briefly on its 10% rating later.

The dead cat drop is an old political ruse. You only do it when you are in deep trouble. You reach for the dead pussy when your back is against the wall. You hope everyone focuses on the festering, fetid, defunct feline and forgets about your bigger problems.

The “dead cat on the table” tactic is proof that Johnson and his confederate Cummings are still more consumed with campaigning, not governing.

Johnson’s dead cat is a smokescreen to crash the negotiations, get a no deal and blame the EU for all the resulting economic damage, and there will be a torrent of damage.  Damage that Johnson knows is wholly due to the no-deal outcome he cannot avoid without suffering major political damage.

At the very least it makes an issue that the average British voter (and let’s be candid here, we are talking English voters, not British) was already finding complex, even more complex. This gives Johnson a hope of getting some traction for his version of the truth.

Remember the comment of Johnson’s political idol Churchill: History will be kind to me, for I intend to write it.

In a week of remarkable utterances from Johnson, perhaps the most remarkable was his claim that the EU is trying to break up the UK. Why would anyone in Brussels, Berlin, Paris or Madrid be bothered when Johnson is doing such a spectacularly good job of it, by himself.

Leaving aside his bizarre attempt to characterise Macron, Merkel and Sánchez, all leaders of countries that once had empires, as rabid secessionists, the fact is that Johnson’s UK internal market bill, which the House of Commons starts debating today, further weakens the ties that hold the United Kingdom of great Britain and parts of Northern Ireland together.

The Bill is not only an assault on Britain’s reputation as a country that honours its international agreements, it does the same to its internal ones. It contains a massive power grab against the UK’s devolved governments, particularly Scotland. A power grab that means that important decisions on future infrastructure and other big spending plans would be taken in Westminster, not Edinburgh.

It will, in the words of the SNP leader at Westminster, Ian Blackford MP:

“…drive a horse and cart through devolution, it will weaken our [Scottish] parliament and put us at the mercy of the Tories”.

Not that the SNP is taking this lying down. Scottish First Minister Nicola Sturgeon was already preparing herself for yet another big win at the May 2021 Scottish parliament elections.

The SNP has averaged about 54% across the 8 major opinion polls published since the start of February. This is some achievement for a party that has been in government in Scotland continuously since 2007. Its vote has risen at every Scottish Parliament election since 2007.

Where the SNP once modelled itself on Fianna Fáil, Fianna Fáil should now look to the SNP for inspiration.

7 out of the 10 opinion polls on Scottish independence held since Feb 2020 have the pro-independence Yes side ahead by between 3% and 9%. Two polls had No ahead by 1%, while the remaining one said it was a tie.

As I have said here several times (most recently here and here) Boris Johnson has done more for the cause for Scottish Independence than any one. His dead cat accelerates the likelihood of Scottish independence.

This is not something we should fear, but it will have major implications for all of us on this island. We need to start having adult conversations about this now.

The other odd assertion from Johnson is that the EU is still trying to stop Brexit. EU leaders get that Brexit cannot be stopped, not least because Brexit has already happened. Britain left the political institutions of the European Union on January 31 last.

Political Brexit has happened and yet – despite decades of being told by Eurosceptics that they were suffering under the yoke of these EU institutions – the great British public is not feeling any less burdened or enslaved.

The part of Brexit that has yet to happen, the part that will really impact people’s day-to-day, will be changing the EU/UK trading relationship.

Johnson’s arch brexiteer government opted to leave both the customs union and the single market. But leaving both is not a simple matter. It requires careful negotiation, especially when it comes to defining the new relationship.

Johnson cannot alter the basic facts of geography, or maths. The EU is a wealthy, well regulated market with high standards and fair procedures, including dispute resolution. The UK is sitting on its doorstep.

The power balance lies with the EU, simply because it is the bigger partner. The UK has more to gain from getting favourable access to the EU market than the EU does with UK markets. This is basic maths.

Yet the UK not only wants the EU to change its rules to suit the UK’s not yet clear desires and it wants it to do it on the UK’s ridiculously short timescale. There is nothing wrong with the UK having ambitions in negotiations, the problem comes when has delusions based on an outdated notion of British exceptionalism.

Speaking of not facing reality brings us back to the dead duck and its 10% RedC poll rating. Despite everything I wrote last week I expected Martin’s Fianna Fáil to hit the mid-teens in the latest RedC/Business Post poll

It had been a reasonably good week for the Soldiers of the Legion of the Rearguard. Taoiseach Micheál Martin had been on the airwaves a lot, while Minister Stephen Donnelly hadn’t. There were no resignations and no big controversies. Quite the reverse.

Norma Foley confounded her critics by managing the schools return and Leaving Cert results effectively. Two issues which, if they had gone badly, would have ended the careers of more experienced players than Norma.

Yes, the Covid-19 infection figures were on the rise and yes there were harsh criticisms of Martin on the Fianna Fáil parliamentary zoom call, but Martin had signalled that he now had a plan and would announce it tomorrow and the Fianna Fáil call was not until after Red C had done most of its sampling. A coincidence, no doubt.

The Red C numbers were bad. Fianna Fáil’s support was down a full 5pts to just 10%. The worst Fianna Fáil figure in any Red C poll. A 1% drop in support for every two weeks Martin has served as Taoiseach. At this rate Martin and other ministers will not be voting for themselves by February 1 next?

It’s an odd form of leadership. Martin’s considered response to all of this is:

“No government can run on opinion polls from month to month, and it shouldn’t.”

This is a long way from what He thought back in 2011. As I pointed out in May, today’s Taoiseach was less phlegmatic then, saying:

Martin has set the bar for the appropriate ministerial response to historically bad polling. By his own standards his current have been woefully slow to act… so far. You can almost smell the Hoisin.

10 thoughts on “Derek Mooney: Of Dead Cats And Ducks, ‘Tis Of Thee We Sing’”