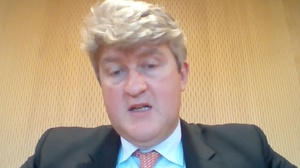 Live from the Convention Centre, Dublin

Fresh from a blistering Dáil speech against the latest restrictions, Independent Clare TD Michael McNamara (top), who recently chaired the joint Oireachtas Covid-19 response committee, takes to the stool of doom to answer YOUR questions about the rona, Level 5 and his much-envied barnet.

12 thoughts on “Answering A Broadsheet Reader”