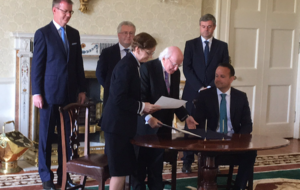 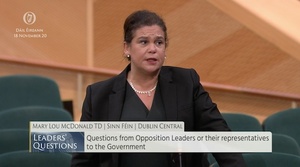 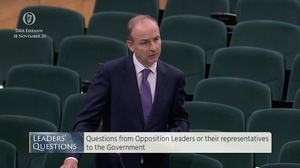 Micheal Martin: “I have taken questions on this issue as Taoiseach. I took them yesterday and I’m taking it right now. You’re asking questions about this and I’m going to take the questions. And I thought your question was very interesting and I want to say one thing at the outset. Your assertion that there is horse trading involved, in the context of the appointment of Paul Gallagher, as Attorney General, and some connection to the appointment of Justice Woulfe to the Supreme Court is an untruth and a false assertion, and you should withdraw it because it impugns the integrity and the ability of the present Attorney General who has had nothing to do with that.

“I don’t believe politicians should be involved in terms of negotiations about who should be a judge or who should not be a judge. I don’t actually think that’s the function of a politician. And when I learn that the Judicial Appointments Advisory Board, chaired by the chief justice Frank Clarke and the presidents of the other four courts, in addition to representatives of the Law Society and the Bar Council, when I learn that they deemed Justice Woulfe suitable to be a Supreme Court judge, that was good enough for me.

“I have no interest in embroiling myself any further. The minister of the day, the notifications may be sent in, representations may be made by judges to the effect that they would like to be considered for particular positions. The Minister for Justice of the day brings one name to Cabinet. As far as I was concerned, the fact that the JAAB, or the Judicial Appointments Advisory Board, was satisfied that Justice Woulfe was a suitable candidate for the Supreme Court, as far as I was concerned that satisfied me and I wasn’t going to second guess it.”

Mary Lou McDonald: “The Taoiseach’s response is incoherent gibberish and he knows it. TheTaoiseach has changed his tune from whence he sat on the Opposition benches and correctly challenged the Government of the day to give an account if itself and the Justice Minister to give an account of the process by which a selection for judicial appointment was made. And the standards then, Ceann Comhairle, are the standards now.

“And the responsibility of the Oireachtas, to hold the Government to account, remains. And remains paramount. You reach for the JAAB process, even though you know that that was one of two channels to which names came forth. So please, don’t rehearse that nonsense again.

“That there was horse trading around the position of Attorney General, is not only truthful, it’s a verifiable truth. It played out in the media, Taoiseach, between yourselves, Fine Gael and, let it be said, the Green Party.

“But I hear that you don’t wish to be further embroiled in these questions so the straightfoward and correct and proper thing Ceann Comhairle, to happen, is that the Minister for Justice presents herself and gives an account of those three weeks, between the 27th of June and the 16th of July and sets out, for the satisfaction of this Oireachtas, the process by which four names became one, four applicants became Seamus Woulfe. That is what this Oireachtas demands and deserves.”

Martin: “Sinn Féin has a habit of keep on repeating the above and then asserting that it’s the truth. It’s an untruth, deputy, what you’ve just said. It’s not verifiably true that there was horse trading involving the position of the Attorney General, not verifiably true and stop misleading the House in that regard and deliberately, in my view, creating a story that has no foundation in fact.

Whats the deal – lying would be really high risk for Mary Lou if she got caught.

She wouldn’t need to do it – there’s enough shitty about this Govt.

Stories not adding up.

Based on what Minister Helen McEntee said yesterday in committee ( below ) – on what date were you as Taoiseach informed of the proposal to appoint Justice Woulfe.#GolfGate #Dail #HowIrelandWorks https://t.co/nD63qJio3W pic.twitter.com/1yjUMAHPsX

Secondly, it meant that, if Martin was not going to select a party member as justice minister, he would have the choice of attorney general and he had already determined that [Paul] Gallagher was his man.

The AG’s role is supposed to be legal rather than political, but this simplistic dividing line can become moveable or blurred, with legalistic arguments and interpretations becoming very political and divisive. Martin knows that Gallagher is daunting when faced with difficult arguments from stroppy ministers and their officials and he also knows that Gallagher is his AG – not Varadkar’s. 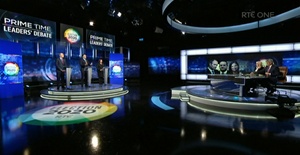 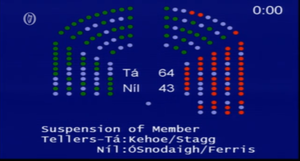 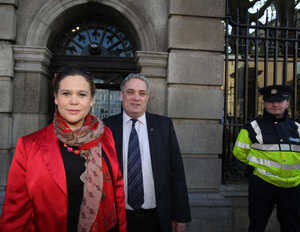 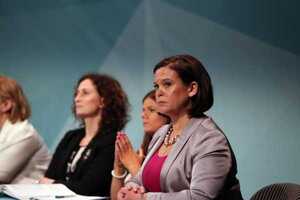 15 thoughts on ““Stinks To The Highest Heavens””