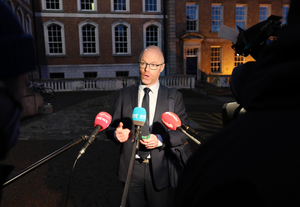 The Minister for Health Stephen Donnelly has said the first Covid-19 vaccines will be adminstered on December 30.

Minister Donnelly said frontline healthcare workers and nursing homes will be vaccinated first and we can “then have a different conversation about opening up”.

Cabinet were told today that around 10,000 batches of the Pfizer/BioNTech will arrive after Christmas.

the roll out of these will begin next week to the most vulnerable and that they would build safely and swiftly from there.

Thank you, but gentlemen first.

First vaccinations to be administered here on 30 December (RTÉ)