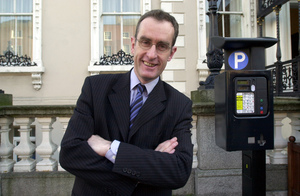 The council is seeking approval from councillors to introduce a 12-month pilot scheme to allow fixed-charge notices to be issued to motorists whose vehicles are blocking bus lanes, cycle paths, clearways and access to driveways.

It is also proposed that such on-the-spot fines will be issued for vehicles parked on footpaths and non-commercial vehicles parked in loading bays, as well as illegally-parked coaches and buses.

In a report to be discussed at a meeting of the council’s traffic and transport committee next week, council officials will outline how clamping vehicles parked illegally in bus and cycles lanes as well as clearways is not the preferred option as it ensures the disruption continues until the owner returns, pays a release fee of €80 and the clamp is removed…

Oh No You DIDn’t?

6 thoughts on “He Put The Clampers Outside”