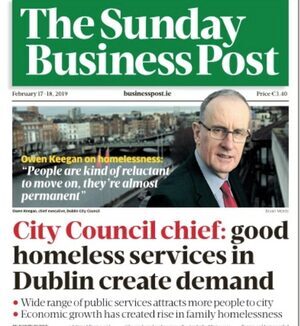 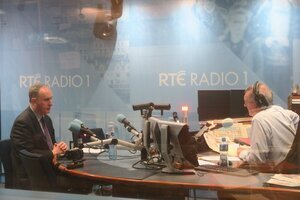 Dublin City Council’s CEO Owen Keegan was interviewed about  a range of matters.

These included the Luas Cross City works, the College Green plaza the lack of cycling facilities in the capital, housing and comments of Housing Agency’s boss Conor Skehan who recently claimed some people were ‘gaming the system’, by, he alleged, declaring they were homeless in order to jump the housing waiting list queue.

He was also asked his opinion about the €500,000 that Dublin City Council have voted to spend on lowering a recently built flood defence wall in Clontarf.

“Business is recovering very well in the city centre. We’ve held the retail core, despite all the challenges and it’s a difficult time for retail generally with the move to offline [sic] sales. It’s about the quality of the  retail experience and about the whole public…it’s not just about how you access it.”

Sean O’Rourke: “This is an another angle being taken by, this is another one of our listeners, Marie, ‘will you please ask Owen Keegan what’s the plan for cyclists trying to make their way safely through the city; you take your life in your hands and probably drive Luas drivers mad as well cycling down Dawson Street’?”

Keegan: “Well one of the immediate things we’re going to do is improve cyclist facilities around the College Green area because we recognise that it is very challenging at the moment. There is a need for significant further investment in cycling facilities in the core city centre.”

Keegan: “It’s basically an open space but, you know, finished in very high quality materials, you know, for pedestrians. There will be a dedicated cycle track on one side of it, a two-way cycle track. I mean I’m not going to describe the image here..”

O’Rourke: “It’s a public facility…but again people are thinking, ‘well, you know, that was supposed to be the great appeal of the boardwalk and the first job that has to be done there, along the Liffey, is you’ve to go out and clean up the needles that are there, left by people unfortunately who have the wrong relationship with drugs.”

Keegan: “I think there are issues about the boardwalk but I don’t believe that this public plaza will be, I think there’ll be significant uses of, you know, I mean, one of, the problem with the boardwalk, at times of the day, it isn’t that used, it has been frequented by, you know, certain category which is unfortunate. I don’t think that issue will arise here.”

O’Rourke: “What about housing? Obviously you have a responsibility there and it’s in Dublin, perhaps more than anywhere else, that the crisis is most keenly felt. What have you been able to do by way of, I mean how many new social houses or apartments did the city council build? I don’t mean ones that you supplied to new, or sorry to people who didn’t previously have one, what is the story there at the moment in Dublin City Council?”

Keegan: “Well, look, the housing situation is very difficult and the city council, we’re not responsible for the performance of the housing market. The recovery in the general housing supply has been slow, much slower than, given the buoyancy of the economy – that’s not our direct responsibility, but it is a major factor, so, I suppose the housing crisis is partly because we got out of social housing building and that would have been, and in actual fact there was no money to spend on social housing, it’s something that I think was most unfortunate. We’re back in social housing now, it’s taking time to ramp that up.

“But you know we’re dealing with the consequences of the failure of the private housing market and we have some influence on that market, in terms of planing policy but there are other factors there. But we have been very proactive in terms of sourcing our social housing. I mean last year we would have sourced about 4,100 units – not many of those were new builds. But there was an awful lot of housing that had been, our own stock, that had been out of commission, that we recommissioned.

“We made about 2,400 HAP housing assistance payment units available, the new builds would have been, we built around 100, sorry 250, the approved housing bodies brought about 350 units of supply, we got about 56 on Part V. Overall, we did about 4,000 allocations.”

O’Rourke: “But that would seem to be just a fraction of what’s needed in a city of a million people? How many people are on your housing list, waiting list?”

O’Rourke: “What would you expect to do this year?”

Keegan: “Well I’d expect to do a lot more than that.”

O’Rourke: “Would you expect to double it?”

Keegan: “I’m not sure we’d quite double it, no, no. We have an awful lot of houses at different stages of construction, we’ve under construction, at planning, design, so, the pipeline is building up. It takes time to get housing. And we were out of the social housing business. At the same time, a lot of our effort has gone into, we brought another 200 hostel beds on, we’re working on about 500 family hub units, all of these units are delivered by the city council so, you know, we have been very proactive, compared to where we were two years ago and we would begin to see the benefits of that over the next two to three years.”

O’Rourke: “Is money an issue for you or have you got as much as you think you can spend?”

Keegan: “I think in fairness we’re getting as much as we think we can spend, you know? I don’t think that is an issue.”

O’Rourke: “And what about space in which to build?”

O’Rourke: “Yeah, I mean, talking about the list, the 19,000 people on it, do you have a view on what Conor Skehan had to say, the chair of the national Housing Agency, that some people were making themselves homeless in order to get quicker access to accommodation?”

“There is probably, you know, a sense to which, given the political priority  on housing families who are actually homeless, the priority being put on that, you know, people who are queuing in an ordinary fashion, in very difficult conditions in the family home, some of them may say ‘well look, I’m not getting anywhere’, you know, and may have made themselves homeless.

“But I think someone has to have an understanding of the factors, it’s not as simple as, I think the word ‘gaming the system’ was unfortunate. People can be in very, very difficult circumstances at a family home and it may not be tenable for them to continue to reside there and they present…”

O’Rourke: “And in desperation maybe, they think there’s a quicker route to a permanent home…”

Keegan: “Yeah and given how important housing is, it’s not unreasonable that people would maximise, now I don’t advocate, and we certainly think people are better off being in the family home where they have family supports and in many, most cases, it is by far a better option going into a hotel, but you know, we have to accept that for some people it is not a sustainable option.”

O’Rourke: “One other question, it’s on the mind of some of our listeners. A lot of time, I think was it two years and a lot of expense went to raising the sea wall, that protective barrier in the Clontarf area. And now it’s going to be lowered again so that motorists can have their view of the sea restored? Does that make sense?”

Keegan: “It doesn’t make sense to me. And I would have advised the members strongly against it. But, ultimately, this was a political decision. In fairness to the elected members, I think we started that, the construction of that project in the run up to the general election. And having sailed through the planning approval process and nobody  objected to it, none of the councillors objected to it, it was unanimously endorsed, the part VIII at the council. When we went to build it there were a number of concerns raised locally and they just gathered momentum in the run-up to the general election and, certainly one councillor was particularly active in campaigning against it and kind of, we were, the contractor was on site. It just, we kind of just lost control of the thing, so it was unfortunate. I mean, don’t start sensitive projects in the run-up to a general election would be the lesson I’d learn from that.” 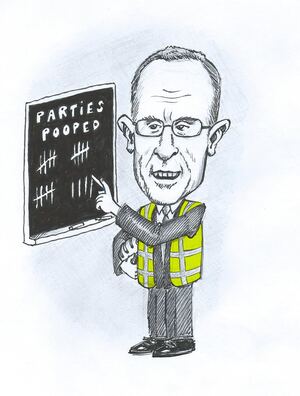 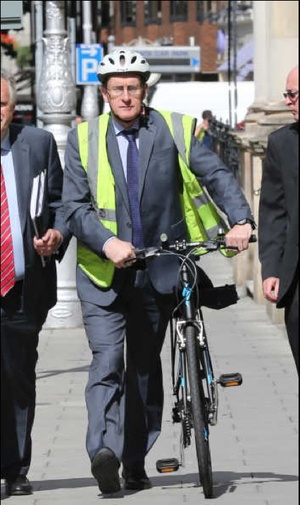 “Nothing that has occurred since I made the decision has changed my opinion that the decision was appropriate, balanced and reasonable. I very much regret the decision of Garth Brooks/Aiken Promotions not to hold the three permitted concerts and not to examine the options proposed by the city council in relation to the two concerts that were not permitted. This was their decision and they must accept the consequences.”

Keegan: Brooks and promoter ‘must accept consequences’ of cancellations (breakingNews) 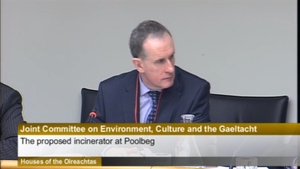 When questioned by Michael McCarthy whether or not the Poolbeg Incinerator Project will go ahead, Owen Keegan Dublin City Council manager replied “I don’t know”.

Is ANYONE in control?

Dublin City Council confirms €29.77m spent on consultants working on the Poolbeg Incinerator project, initially projected it would be €8.3m