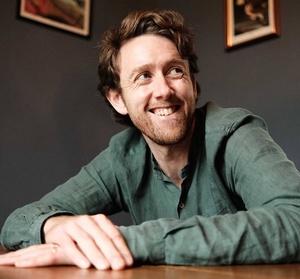 Peter Doran – Nothing New Under The Sun

Paradise in the picturehouse.

Peter Doran‘s new promo is an object lesson in how you don’t need a mega budget to make a memorable and affecting music video.

The singer/songwriter (top) from Mullingar, County Westmeath, has a new album Voices due later this year. You can hear echoes of The Blue Nile and Radiohead in his soulful voice.

The video was directed by Lucy Jones and John Hennessy of Kerbute Productions.

“One small idea led to another until before I knew it I was standing in the cavernous space of an unused cinema in my Mullingar hometown with the camera rolling.

“I was a boy the Ritz cinema was coming to the end of its era but I did catch a few blockbusters there in my time. Before my time, my parents courted in the glow of the enormous screen. I’m told that space was used regularly for live music too and that in the ’50s and ’60s there was a stipulation that there had to be an interval in every feature where musicians would take to the stage and perform. I believe the great Joe Dolan was a regular performer here.

“All this is to say that the building is filled with a great history of film, music, community and young love.”