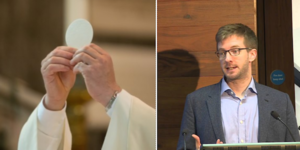 Religious services are not covered by the lockdown regulations, says Professor Oran Doyle (above)

Oran Doyle, a professor in law at Trinity College Dublin and director of the COVID-19 Law and Human Rights Observatory writes (full article at link below):

Last Friday, RTÉ reported that the Archdiocese of Dublin had advised priests not to give communion to parishioners after Mass, either inside or outside churches.

The Archdiocese is entitled to give such advice, as indeed would be the Government. But the advice appears to have followed pressure from the gardaí.

‘Drive-in masses are not permitted as no gatherings of people outdoors or indoors are permitted.’

If this is intended to be a statement of the legal position—and it is difficult to read it any other way—it is categorically incorrect.

…This echoes a previous controversy from last November—when the relevant law was the same—in which the gardaí threatened to prosecute a priest in Cavan for saying Mass. The Irish Times reported:

Again, this statement of the legal position was categorically incorrect.

…In the Dáil debate on the extension of the 2020 Act, Michael MacNamara TD stated that priests would be committing a criminal offence if they opened the doors of their churches for Mass.

The Minister for Health assured the house that religious services were non-penal and there was no penalty attached to them.

Deputy MacNamara responded that this was untrue.

The Minister responded that he had signed the regulations the previous night and could assure the House that it was a non-penal provision and would remain thus.

Both Deputy MacNamara and the Minister were incorrect.

Conducting religious services was not a criminal offence, but this was simply because it was not covered by the Regulations at all, whether as a penal or non-penal provision. [More below]

Religious Services and the Rule of Law: Authority and Coercion (COVID-19 Law and Human Rights Observatory)

You Can’t Stop The Music