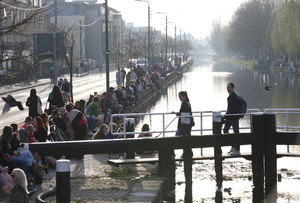 Via former Minister for Justice Michael McDowell In The Irish Times [full article at link below]:

…We do know that the health establishment is constantly conducting rolling public opinion surveys, and that helpful parts of that research are fed out to the media from time to time. We are all being monitored carefully.

And you don’t have to be Prof Dolores Cahill to feel a little uneasy about that. The public mood is not merely monitored; it is to some extent created.

Media advertisements “brought to you by the Government of Ireland” or by State-funded or State-owned agencies in support of solidarity serve twin purposes – they subsidise cash-starved (and sometimes unchallenging) media and they feed into public opinion to be surveyed, reported and fed into policymaking.

Our friend An Garda Síochána also plays a major part in mood creation. “Grim” was the adjective given to the Nphet’s current analysis in “off the record” briefings by the AGS. Can we see the grim analysis, please?

…The truth is that the dam of public patience has already cracked and broken. With longer evenings and warmer weather, younger generations have taken to the outdoors. Walks in the parks or down the Grand Canal or along the Dodder valley tell me their own tale. Reopening the schools and associated activity must be a driver of community transmission too. The virus doesn’t distinguish radically between 17-year-olds and 19-year-olds.

Community transmission is going to remain high until mass vaccination makes an impression. Seasonal aspects of the pandemic and of social behaviour are obvious and irresistible. You simply cannot drive the population back into their own houses for May and June. We have to plan accordingly…

‘Is The Emergency Facility In Citywest Still On Stand-By?’

Charge Of The Light Ale Brigade