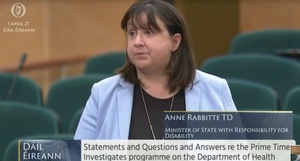 Dáil at The Convention Centre, Dublin.

Minister of State at the Department of Children, Equality, Disability, Integration and Youth Anne Rabbitte read into the record questions that she asked of her department last Thursday evening before the RTÉ Investigates programme on secret dossiers being held on autistic children and their families was broadcast.

Ms Rabbitte said there are 270 ‘dormant cases’ and currently 48 families whose cases are ‘open’. A liaison officer is going to be put in contact with those people to make them aware now that they are “impacted”, she said.

A Department of Health report conducted by a senior counsel said nothing illegal was done in compiling the information.

The Department of Health is due to answer questions in the Dáil this afternoon re compiling dossiers on children who take cases against the State.

We & @DRIalerts wrote to politicians to furnish them with some questions that need answering: https://t.co/0ukOXaUmWK

“As I said earlier, I want to apologise to the families who watched the “RTÉ Investigates” programme last week for any upset that was caused, and for any questions I could not answer today. It is my ambition to get those answers and to put them into the public domain because I believe that is how we will build trust and ensure there is transparency. I will start there.

“I thank the Deputies who made contributions to the debate today. I agree that upholding the rights of the must vulnerable members of society is of the utmost importance and I am conscious of the upset that recent allegations have caused for the parents and families concerned. I firmly believe that the whistleblower has an important role in raising matters of public concern and I acknowledge the actions of many brave people in coming forward to raise their concerns.

“I stress that serious allegations have been make against the Department and a review is under way, directed by the Secretary General, which will provide the factual detail related to these matters.

“It is important, however, to emphasise that allegations of a similar nature have already been examined by the independent senior counsel, which advice I am looking to publish and be made available to all. That was the case before the revelations on RTÉ radio this morning. In the future, consideration will need to be given across all parties as to how the transparency of the whole litigation process can be improved.

“I wish to read into the record the questions that I asked my Department last Thursday evening before I watched the programme. It is important to put this in context.

“I also asked how many closed cases there are and how many families have been impacted and will need to be contacted. I have been told that, in total, there are approximately 270 cases.

“I do not know how far back it goes. I asked was consent sought from all families and if it was not, why that was the case. Perhaps a review will show that consent was not sought.

“I also asked why did this particular practice of case tracking and file management start and when it started. I asked whether the Minister can be provided with a copy of the initial legal advice showing this is an acceptable management of litigation. When I asked these questions, I did not have sight of the senior counsel report that was published last November.

“I also asked was other legal advice about this practice sought from other senior counsel, data protection specialists or the Office of the Attorney General over the years and, if so, what was the content of the advice. That is important. I asked how regularly the Department sought updates on these cases from the local HSE community healthcare organisations, CHOs, and who sanctioned them on each occasion.

“I asked how much of the material received came from the litigants for the child or family. That is important in terms of who presented it. I also asked was the material assessed by anyone in particular once received by the Department.

“I asked why the Minister was not told last year that this was an issue that was being investigated by a senior counsel. When I talk about the Minister, I refer to myself. I also asked when the senior counsel was hired. We all know now it was this time last year.

“I further asked when the senior counsel’s report was received by the Department. I now know it was received in November 2019. I asked why the Minister was not informed that this report had been received, or the findings in it. When I asked that question, I still did not have the report and I did not receive it until Saturday.

“I asked who approved the terms of reference for the SC. I also asked who approved funding for the work and how much did it cost. It cost €10,000. I further asked if I could be provided with a copy of the report of the senior counsel and I am now in receipt of it.

“I asked how many people had access to the information over the years. That is what is being sought as we speak.

“I asked how many people and who currently has access to the spreadsheet. It is my understanding – it is important for Members to know as well – that the file was not held within the disability section, it was held in the social care section. Social care also includes mental health and older persons.

“I asked if other concerns about this file management had been raised over the years. I am awaiting a response to that. I also asked if there are other similar file or case management protocols in place elsewhere in the Department. That was my last question up to the meeting with the Secretary General last Friday.

“Before I came into the House today, I was expecting a briefing, but proceedings ran ahead. Some of the script that I read out is from the Department but a lot of the information I presented this afternoon is my own. I hope it tackles some of the issues.

“I agree with what was stated: this will be a test for us because there is a test of ethical and cultural change, a shift in mindset and transparency and in trust and engagement. That is where we need to get to. It must be a rights-based approach. It is unfortunate that legal cases continue to happen but we need to know the process.

“What is important is trust, transparency and the person at the centre. If my team and I manage to get to that space of understanding, sharing the information and ensuring a rights-based approach, it will ensure there is solid ground going forward. However, first I must sort out what the practice is and share it with Members in an open, transparent way to build the trust of the parents. The parents and the children must be at the centre of today’s debate.

“I say to anybody who watched the programme last week that the Government believes in being supportive of young people and their rights to education and health. We must ensure that we put them first, front and centre.

“We care 150% about them, but at this moment in time there are questions. There are doubts and there is a shadow, but we are going to clear that. When we clear it and I stand here and emphatically tell Members the process that happened, we then want them to continue to trust and believe in us, their physicians and in the process, because it is there to protect. That is what it was always about.

“When the Taoiseach stood here yesterday on the floor of the Dáil, he wholeheartedly spoke about the fact that he introduced special needs education and that it had not existed in the past. That just shows the low base we have come from. One has to wonder how high within the Departments we have risen, but we will question it and challenge it. I will push it and get the answers to ensure that trust and transparency are returned to the people who need it most, the most vulnerable in society.”

3 thoughts on “The Last To Know”