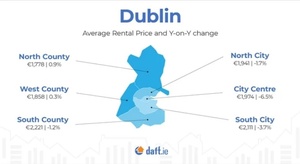 Monthly asking prices for rents in Dublin dropped in the first three months of this year, but increased elsewhere – according to the latest rental report from property website daft.ie.

The average monthly asking price nationally stood at €1,443 in the first quarter, up 1.7% on the same period last year.

With many people working from home during the pandemic, there has been an increased desire to live outside of the capital – and this is reflected in the report.

In Dublin, asking prices for rents were down 3.2% year-on-year, while prices in the rest of the country were 7.1% higher.

In Cork, Galway and Limerick cities, they are 6% higher than a year previously, while in Waterford they are 8.3% higher.

Outside the five main cities, asking rental prices are up 7.3% year-on-year.

‘No Rent Allowance Or Sad Stories’

Cook From Your Bed

Young Man, There’s No Need To Feel Down

1 thought on “Dublin Down”