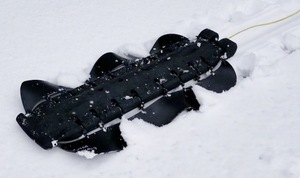 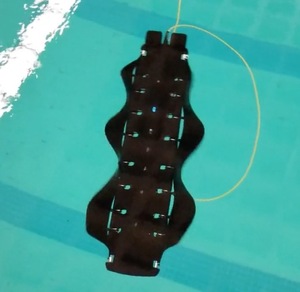 Behold: Velox – a prototype amphibious robot designed by Pliant Energy Systems of Brooklyn with an all terrain propulsion system inspired by the locomotion of several natural species. To wit:

Velox can use several modes of locomotion found in the animal kingdom using just one pair of “fins”. These fins are best described as four-dimensional objects with a hyperbolic geometry that allows the robot to swim like a ray, crawl like a millipede, jet like a squid, and slide like a snake.

A craft equipped with this system has unprecedented freedom to travel through a range of environments in a single mission. As an underwater vehicle, the robot’s ability to instantly reverse direction and do quick turns make it ideal for task such as coral reef inspection or dragon fish hunting where a craft must rapidly manoeuvre to look around and between objects.

First the dragon fish, then all humans.