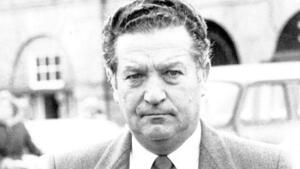 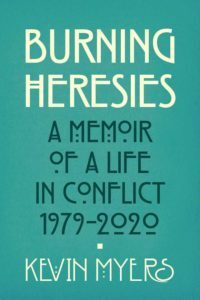 From top: Richard Flynn, the only person charged with the death of Father Niall Molloy; ‘Burning Heresies’ by Kevin Myers

‘[my partner] Grania and I were invited to the Westmeath Hunt Ball in Mullingar and later we left for a house party.

We were welcomed by a tall handsome man in a dress suit, whose lordly hospitality was tinged with a patrician charm.

His very attractive wife served the drinks. I retired to bed around four. Grania got up at seven, along with most of the household, for the hunting field. I lay unconscious until Midday, then rose. There was just one person remaining when I trickled downstairs.

‘Forgive me, there were so many people last night – you are…?’

‘Sorry, I’m a little confused. Who was the fellow serving the drinks?’

‘That was Father Molloy.’

‘And a family friend.’

Richard cooked me brunch and chatted about his life. He had been a farmer, but had contracted brucellosis, and so, unable to be near cattle, had gone into business, at which he had been remarkable successful. I asked him how the illness had affected him.

‘Aches all over, a terrible lassitude, which I have to fight every single day.’

I did not ask about the third symptom, impotence, and our conversation affably toured the world until the hunting party returned. I liked Richard enormously, so much so that we stayed in touch, and I visited him a couple of times at his auto spare shop in Blackrock, county Dublin.

A few months later, after a wedding party for one of the flynn daughters, Father Niall Molloy was found beaten to death in the Flynns’ bedroom. Richard was charged with assault and manslaughter. The case went before Judge Frank Roe, who ordered the jury to acquit, and Richard walked free. Personally, I felt happy for him, though justice had clearly not been done.

It was later alleged that Roe had been a friend of the Flynns, but I doubt whether any Irish judge would have accepted a case that could have so fatally compromised him. However, Roe was an ardent Catholic who would probably have done his utmost to protect the ‘good name’ of the Catholic Church, a term which had not yet become risible. The clearly sexual nature between Niall Molloy and Teresa Flynn might have been exposed in any trial, which Roe was apparently determined to forestall.

It was in Charlie Haughey’s imperishably worthless aphorism, an Irish solution to an Irish problem.’

The Killing Of Father Molloy (RTÉ)

4 thoughts on “Meeting The Host”