Broadsheet on the Telly‘s Neil Curran shared a graph with viewers (see below) showing  virus growth in Ireland with Dublin and Donegal singled out, prompted by an RTÉ article which Neil claims is untrue and generating fear.

“Torture numbers, and they’ll confess to anything”
Gregg Easterbrook

The only people who like accountants are other accountants. But there is one attribute to accountants we can all take from; predictability.

Whether its good news or bad news, accountants like to be able to predict it. Otherwise, even if you are giving your investors sky high revenue and profit results, if you didn’t predict it then you’re not in control of your books.

The same can be said for viruses. The difference here is that unpredictability leads to uncertainty and leads to fear. Fear is a very powerful force.

On September 18, Dublin entered level 3+ on the government’ Covid-19 roadmap and on September 25, Donegal followed suit. Second waves, doom and gloom, shame and horror – we are back there again.

With Tony Holohan’s return last Sunday, it brought a further wave of anxiety as the Level 5 leak spread like wildfire (how many of you are receiving the WhatsApp messages already where someone’s Mammy’s Aunt is a teacher and heard level 5 kicks in on X date?). It’s now a media circus.

Yesterday, RTÉ ran a story with the headline, “Still ‘exponential growth’ in Dublin despite level 3 restrictions”. The first paragraph tells us how Associate Professor of Biochemistry at Trinity College Dublin, Tomás Ryan has said the situation in Dublin has got worse and we have what looks like exponential growth.

This is completely untrue… 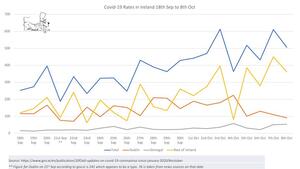 Taking the daily rates from September 18 to October 8, cases are currently trending downward. That’s not to say we are out of the woods yet, we will need to see if that trend continues over the next 5 days.

However one thing is for sure, Dublin is not experiencing exponential growth and there is nothing in the data from the past 7 days that would suggest that.

So why did RTÉ run that article and give column space to an associate professor that was claiming a false truth? Why didn’t RTÉ fact check his claim?

It is fair to say beyond Dublin and Donegal the rest of Ireland is deteriorating rapidly. However, based on the data for Dublin and to a lesser extent Donegal, there is evidence to suggest level 3 restrictions are working, even if they are working at a slower rate than desired.

Yesterday, NPHET recommended no changes to current guidelines of level 3 nationwide and the government heeded their advice. Reading between the lines would suggest they are monitoring progress accordingly.

Without suggesting any return of complacency, it would do us all a favour if the government could acknowledge that level 3 is having a positive impact in Dublin and they are hoping for a similar trend nationwide.

Otherwise the lack of clarity will continue to fuel fear, madness and false claims made by people in positions who should know better.

THE ULTIMATE LESSON from Sweden – short and sharp for sharing. It will help people to grasp the reality, in these strange, strange times.

In follow up, here is a graph showing all CoViD-19 Cases and Deaths in Ireland. The graph is smoothed to the 7 day average. The cases, they are rising for sure but look at that death rate. So yet again we ask: #WhyAreTheyDoingThis and #WhyDoWeAcceptIt . #Casedemic pic.twitter.com/DRZP6NGObv 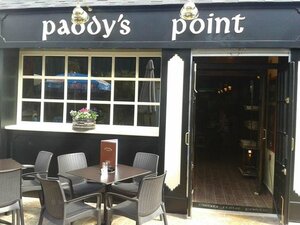 Broadsheet on the Telly: Holiday Special

Broadcasting from the Costa Blanca area in Spain, Irish bar owners Hazel and Rory of Paddy’s Point (top) joined the panel to share their views on the summer holidays, lockdown in Spain and the outlook for the bar trade both in Spain and Ireland.

As always, Derek O’Donoghue and Vanessa Foran joined us with Vanessa streaming from the tropical hotspot of Brittas Bay [County Wicklow]

Rory and Hazel also share insight on how the the Spanish government have handled this year’s Selectividad, Spain’s equivalent of the Leaving Cert, much to Derek’s shock.

Are there lessons that can be learned for Ireland? Bring your own Sangria Broadsheet on the Telly returns at 9.30pm with another lockdown special streaming LIVE here (above) and on our YouTube channel.

Join old friends, new pals and domestic pets as we rejoice in The Easing. A month ago, a post went up on Broadsheet headlined ‘Dash It’, which highlighted a sign erected in Irishtown, Dublin 4, presumably by locals, requesting no joggers on a street due to the narrow pathway.

Some commenters threw ire at joggers, while others scratched their heads at the anger and some just got a chuckle from it.

Regardless of whether the sign did anything to deter joggers from doing their thing, the post does mark a moment in our Covid-19 journey where society risks turning on itself.

It’s now May and with the Government’s roadmap to lifting restrictions published, the reality of another three months of restrictions is sinking in and there are elements of society looking to vent frustration and anger somewhere.

Certain work groups, such as the publicans, are making noise about the desire to open earlier in line with restaurants and cafes. Until now, public talk of ridiculing the lockdown restrictions was taboo, something quickly shut down and certainly not entertained by the mainstream media.

We were all in this together by staying apart, as the campaign goes. However, as plans to lift restrictions, it is apparent that we may not be in this as together as we think, as we all have different paths out depending on our profession, employer, family status or age.

More and more, people are expressing frustration, pushing the limits of restrictions as the Government notes an increase in motor traffic and anecdotal evidence of more people outdoors going about their walks and exercise without giving much consideration to social distancing.

And to be fair, society’s frustration is understandable. We are social creatures, most of us haven’t seen friends and family in too long and online interactions will never make up for it. Many people are concerned about their livelihoods and are eager to get back to work.

Some are facing the prospect of having to rethink their careers as certain industries have a high degree of uncertainty as to how they can operate profitably in the new social distanced world.

As society’s frustration grows, that frustration will be directed somewhere and the risk of a potential segregation of society is growing.

From the Government’s perspective, the Department of Health’s Chief Medical Officer Dr Tony Holohan recently singled out “younger people in the community” when speaking out about the community infection numbers not falling at the desired rate.

Perhaps the evidence does highlight that “younger people” are part of the community infection chain, but what does that mean when generalised statements are used. What age brackets are “younger people” in? Is it nationwide?

From other parts of society, as more and more people speak out about restrictions, there are  suggestions that we should look at continuing to cocoon the elderly and the most vulnerable in society while everyone else gets back to work and gets on with it.

The mention of this one month ago would have evoked the wrath of the heavens, but now it’s becoming more and more acceptable to air these views. While there is no issue in that, the greater concern is the potential slur on society as a result.

Parents with young families, single working parents and families with special needs children are also facing a dilemma. We know that creches and schools are closed over the summer and as businesses return to work, the honeymoon period of working from home will end and parents will have to juggle their job and home-schooling/childcare at the same time, while those with no children or older children have less of a burden.

The option of Granny and Grandad isn’t there due to cocooning, leaving parents in a difficult position. I know of two working parents who encountered issues recently due to this challenge. One lost a client contract with comments made about children in the background during an online meeting and another faced a frosty reception during an online interview. Has being childless suddenly become a huge plus on your CV?

Love it or loathe it, the path to a lifting of restrictions has been mapped out and the next few months are going to bring new challenges for our society as we rebuild our routines and livelihood. There will be anger, frustration and sadness along the way.

We are looking to the Government’s plan as a route out of this but must remember it’s a two-way street; if the virus takes hold again, we take a step back. No one wants that. We may see further anger and frustration directed at parts of our society, including the vulnerable as a result.

The mental health of the nation is strained way beyond anything we have seen in a very long time. More than ever, we need to practice empathy at a time like this.

So, if you are the neighbour, the manager, the co-worker or just stuck in line outside the supermarket in the rain, remember we still need to be kind to one another and recognise that we are all struggling in different ways.

Neil Curran is part of the Broadsheet on the Telly team, an Improviser and in his own words, an unqualified commentator. You can follow him on Twitter here or on Instagram here.