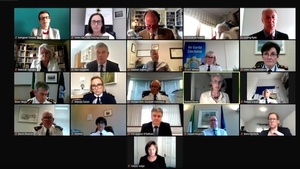 Garda Commissioner Drew Harris is responding to an opening address on 999 cancellations by Bob Collins, chairman of the Police Authority. Minutes to last month’s Policing Authority private meeting published. Damning comments on Garda 999 calls scandal. Gardai have concealed extent of the problem and obfuscated and undermined the PA scrutiny of the scandal. About time we started naming names.https://t.co/qy1jRWogHK https://t.co/pV9WBuPaqS pic.twitter.com/i28yQ4HiHh The Garda Commissioner is to appear before the Policing Authority at 3pm to explain the failure of gardaí to properly respond to 999 emergency calls for assistance in 2019 and 2020.

An internal inquiry led by an Assistant Commissioner into the handling of these priority calls has found that in hundreds of cases gardaí cancelled calls before there was an appropriate policing response.

The inquiry which is ongoing is focussed on domestic violence calls

Drew Harris has acknowledged that there was a practice of cancelling calls, which meant people seeking help from An Garda Síochána did not receive the policing service they should have.