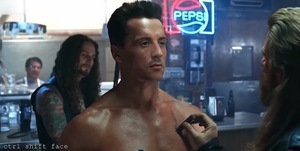 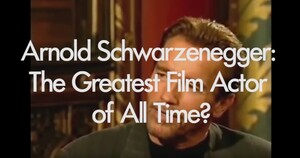 Just like to share my latest video essay with you: Arnold Schwarzenegger: The Greatest Film Actor of All Time? Taking a look at how limited we are in our thinking when it comes to great cinema acting…. 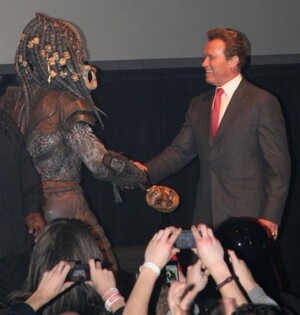 25 years since Arnie and the Predator met and duked it out in the blood-streaked jungles of Central America, the fires of hatred finally subside at the Stan Winston School of Character Arts.

Well here’s Arnie again: this time giving forth on the DVD extras disk of Conan the Barbarian with director John Milius (who Youtuber shastatheragdoll reckons looks uncannily like John Goodman in The Big Lebowski) 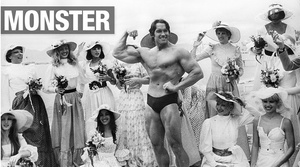 Gawker has compiled a comprehensive and fairly NSFW list of the Terminator’s well-documented awfulness.

While we’re busy contemplating what an awful human being Arnold Schwarzenegger is for fathering a child out of wedlock and lying to his wife about it for 14 years, let’s not forget all the other horrible things about America’s favorite gay-porn-modeling, serial lady-groping, Nazi politician/statutory rapist.

Terry Tamminen, who headed California’s Environmental Protection Agency before serving as Schwarzenegger’s cabinet secretary, has told him that he should be president of a newly reconstituted European Union.

“In the next few years, the EU will be looking for a much more high-profile president—somebody who can unify Europe,” Tamminen says. “The French won’t want a German, and the Germans won’t want an Italian. How about a European-born person who went off to America and … could return to be the Washington or Jefferson of a new unified Europe?”