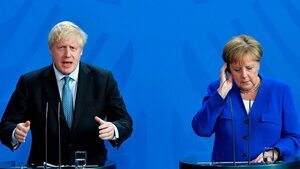 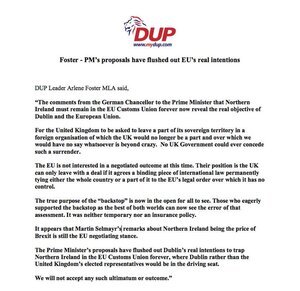 Boris Johnson says he is "glad" to hear that conversations about the Irish backstop can now begin, as he thanks Angela Merkel for a "blistering timetable of 30 days" for negotiationshttps://t.co/6WFJ7C5ISE pic.twitter.com/gL2TpWFcMY 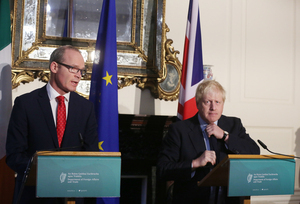 British Prime Minister Boris Johnson is meeting German Chancellor Angela Merkel in Berlin around about NOW where he is expected to reiterate his call for the backstop to be scrapped.

Mr Johnson has said the arrangement to avoid a hard border after Brexit is “anti-democratic” and must be removed to secure a deal.

But the EU has rejected the possibility of any changes to the backstop.

Mr Coveney said the government will not abandon its approach for “some kind of promise on the basis of trust”.

“We are not in the business of being steam-rolled at the end of this because a British prime minister has rolled out new red lines,” he said.

Speaking this morning at @Darcymcgee2019 Summer School #Brexit debate. Key message: we cannot gamble with the peace and stability which the Good Friday Agreement has built on the island of Ireland. The #backstop was agreed by both sides and UK must honour its commitment. pic.twitter.com/NC56PVazVR

“The UK government needs to take responsibility for its choices before it is too late. Prime Minister Johnson’s hero is Winston Churchill and he seems to view himself as a modern day Churchill.

“However, in the event of a no deal Brexit, the UK government’s only Churchilian legacy will be –‘never have so few done so much damage to so many’.” 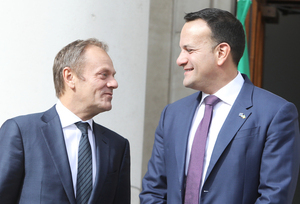 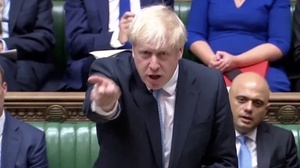 “No country that values its independence and indeed its self-respect could agree to a treaty which signed away our economic independence and self-government as this backstop does,” Mr Johnson told the Commons.

“A time limit is not enough. If an agreement is to be reached, it must be clearly understood that the way to the deal goes by way of the abolition of the backstop.”

When questioned about Mr Johnson’s comments on the backstop, Taoiseach Leo Varadkar said he looks forward to discussing the issue with him.

The Taoiseach said that the threat of no-deal Brexit is a British one and he hopes Mr Johnson has not chosen it.

Mr Varadkar repeated that he hopes to meet Mr Johnson soon and did not want to start negotiating with him over the airwaves. 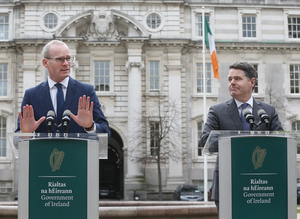 Tanaiste and Minister for Foreign Affairs Simon Coveney and Minister for Finance Paschal Donohoe TD in the Courtyard of Government Buildings today, as they gave an update on Brexit following a Cabinet meeting.

There are myriad reasons why the UK doesn’t like the backstop. They can be simply summarised thus: because it entails compromise.

The EU doesn’t like it for the same reason, but from a different perspective. It entails compromise of the EU’s customs union.

The UK would have tariff free and quota free access to the EU, to avoid customs controls on the Irish land or sea border.

And it entails compromise of the single market. For it breaks up the four freedoms: effectively allowing free movement of goods to and from Northern Ireland but not the other three.

It also means that Northern Ireland would be outside the EU but treated as if it were part of the single market in some areas, including agriculture—a privilege that even the non-EU members of the European Economic Area do not have.

This is a huge ask of the EU, which is so protective of its single market and so suspicious (with no small cause) of British agri-food, especially meat products.

And there is second irony in all of this. Whilst British MPs complain about being “trapped” in a customs union or Northern Ireland “tied into” the single market, they miss the fundamental point: that as Article 1.3 of the [Protocol [on Ireland/Northern Ireland in the Withdrawal Agrtement] makes clear, what we see in the backstop is purely what the EU is prepared to do for the “unique circumstances on the island of Ireland.”

Be in no doubt that when the negotiations on the future relationship begin, we will see far less ambiguity and flexibility from the EU. It is not only the UK that is interested in “taking back control.”

The true cause of our backstop obsession (Kathy Hayward, Prospect)

Meeting possible between May and Juncker – reports (RTÉ) 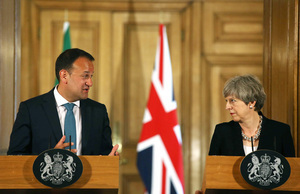 Taoiseach Leo Varadkar and British Prime Minister Theresa May at No. 10 Downing Street in 2017

“Where they see perfidious Albion, the British see duplicitous Hibernia, and have been given just as much reason to do so.

A guarantee against a hard border, perfectly legitimate for stand-alone economic and security reasons, has instead been demanded to “protect the Belfast Agreement in all its parts”, although no part of the agreement requires it.

Securing this demand via Brussels has been proclaimed by the Irish Government as a diplomatic triumph and the centrepiece of its Brexit strategy.

At the same time Stormont has collapsed and Sinn Féin is demanding a Border poll; the Taoiseach has erroneously threatened “a form of joint authority” via the agreement’s east-west body, the British-Irish Intergovernmental Conference; Brexit has been described as breaching the consent principle, although the legal inaccuracy of this could scarcely be clearer; and every effect on cross-Border co-operation has been portrayed as violating the agreement rather than just impacting certain bodies within their remit.

Motorists may soon be obliged to carry ‘proof of insurance’ Green Cards for travel in the UK and Northern Ireland in the event of a no-deal Brexit.

The Motor Insurers’ Bureau of Ireland has advised that insurers and insurance brokers will provide ‘Green Cards’ to motor insurance policyholders who travel to the UK, including to Northern Ireland. 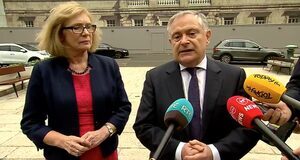 BREAKING: A “very dangerous” suggestion is being made in Europe that the Irish backstop issue should be postponed or deferred, the leader of the @labour Party @BrendanHowlin has been told by colleagues across Europe. #Brexit pic.twitter.com/8o86bfLXDl

“Talking to colleagues across Europe, I now hear for the first time that there is actually suggestions being made that the Irish backstop issue should be postponed. I think that’s very dangerous for us and it’s something that we have to resist.

“But it was highly predictable. I think there is still solidarity from all the discussions I’ve had certainly from social democratic colleagues in relation to this matter but I’ve no doubt that that will become a focal point over the next number of days.

“So there has to be a very clear determination set out by the Irish Government that the backstop issue, and that is a permanent backstop – the whole idea of a backstop being a temporary measure is bizarre, even as a suggestion.

“And that that matter should be put to bed so there can be no discussions on any long-term arrangements with the United Kingdom until that matter is determined in accordance with the agreement that is set out by both the European Union and the UK authorities last December.”

Labour leader Brendan Howlin speaking to journalists on the plinth at Leinster House.