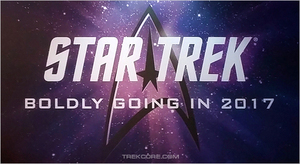 1. CBS have released 50 seconds-worth of nondescript CG as an early taster for the in-development Star Trek TV show.

2. The cast is yet to be announced, but reboot writer Alex Kurtzman is producing.

3. It’s rumoured that this new series will be set in between The Undiscovered Country and The Next Generation.

4. Star Wars/Star Trek… It’s all good. There’s plenty of room for everyone at the all-you-can-eat nerd buffet. Except Kevin Smith. He’s barred.

7. Broadsheet Prognosis: Klingon to the past (I’ll get me coat).