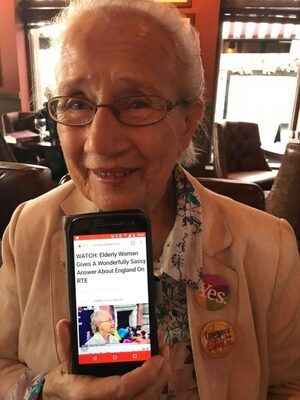 Elderly woman, amazed at modern technology, still knows when older people are being patronised (but did get a great laugh) 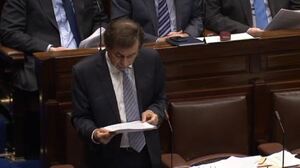 Last night in the Dáil, Justice Minister Alan Shatter referred again to Section 80(5) the Garda Síochána Act 2005 in relation to the non-reporting of the surveillance sweep undertaken by GSOC to the minister before outlining that other sections provided for GSOC to tell him.

It is true that section 80(5) of the 2005 Act provides that GSOC may make a report to me in the
circumstances I have described, but this is better described as an enabling provision rather than a purely discretionary one. In other words, it should be used in circumstances contemplated by the provision. In that context, I don’t think that any reasonable person would regard concerns of the nature we are discussing as anything other than grave or exceptional. I am not sure how anyone could sensibly argue the opposite in circumstances where this issue has dominated the TV and radio news for days on end, has been the subject of countless newspaper headlines and articles, was the subject of statements in this House last week, is the subject of a motion in the House this evening, and is being examined as a matter of urgency by a Joint Committee of both Houses.

Even apart from this, however, there is the separate obligation in section 103 of the 2005 Act. Section 103 provides that GSOC, where it launches a section 102 investigation, shall inform the Minister of the progress and results of the investigation. An exception to this strict requirement is allowed in only three circumstances, namely where supplying the information would prejudice a criminal investigation or prosecution; would jeopardise a person’s safety; or for any other reason would not be in the public interest. The first two exceptions are irrelevant. As regards the third, I find it impossible to see how it would not be in the public interest for the Minister to be advised of an investigation in these circumstances. 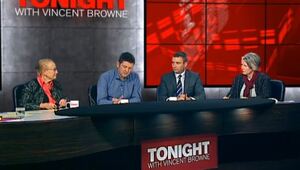 Vincent Browne: “First of all, let’s deal with the legal issue. Catherine, a former Supreme Court judge, do you think really there’s any possible reading of Section 80 of the Garda Siochána Act 2005 that requires GSOC to inform the Minister for Justice of what it’s doing.”

Catherine McGuinness: “Well, looking at the text I would have said that there wasn’t an absolute requirement, certainly you could possibly say they might have a discretionary, a discretionary need to make a requirement to talk to the minister about something that was particularly grave. But I do think it’s left to their own discretion. But, in any case, I really do think that too much is being made of this, about whether the minister was told or the minister was not told. Certainly, from the point of view of GSOC when you look at what has happened – when the minister did hear about it, do you wonder that they didn’t tell him in the first place, you know?”

Browne: “That’s a separate issue. I’m just just talking about the legal thing – was there a legal requirement to tell them under Section 80 of the Garda Síocána Act 2005. He went on to say that, under Sections 102 and 103, there was clearly a requirement on them to inform him. And, I, I can’t, I think this is quite amazing. 102 says, it applies to a situation where a Garda Commissioner asks GSOC to enquire about something or when the Minister asks GSOC to enquire about something – then there is a requirement on GSOC to inform the minister, that’s…”

Browne: “That’s what it amounts to.”

John Mooney: “This all arises out of a public interest inquiry that GSOC ran into collusion between a drug trafficker called Kieran Boylan, from Co. Louth, and members of a now disbanded elite unit of gardaí in Dublin. There were a lot of tensions in that as part of that inquiry. GSOC have been on the record about Garda management withheld documents from them, some documents weren’t furnished at all. That is because this individual was involved in extra-judicial operations, whereby he was trafficking drugs and setting up low-level people. But I think that there’s an issue in that file, in so far as there were weapons and drugs transported at one stage, through European countries.”

Browne: “Was there a remark made by Garda Síochána…”

Mooney: “If you just let me finish the story. But, during that, we published a number of stories in The Sunday Times about what was happening and, at one point, a senior member of Garda management rang GSOC and threatened to use analysts to find out where we were getting our information from and because it was accurate. If we continue on into a couple of months until last summer, there was, Simon O’Brien, I understand had a meeting, where they decided to take a section of the report, out of the report, prior to publication and, a couple of weeks on, the deletion of that particular section of a report was mentioned to Simon O’Brien.”

Mooney: “That was by Martin Callinan. At that point I understand that sent a lot of panic, shockwaves through the Commission, they were very concerned about their own internal security while they may have had fears a couple of weeks prior to that and may have been considering, certainly, bringing in countersurveillance measures. I think when these specific remarks were made they put the cat amongst the pigeons and I think that prompted them into very specific course of action.”

Browne: “Just one further issue I want to pursue with you…and it concerns that if the Garda Síochána believe that a crime had been committed within GSOC to do with release, leaking of confidential information, they would have been justified in undertaking the tapping of phones but in order to do that legally, they would have had to get the authorisation of the Minister for Justice…”

Mooney: “Well I put that question to Alan Shatter last week and he’s refused to comment on whether he signed a warrant, which allowing any sort of surveillance on media organisations or journalists, in particular.”

Browne: “But, GSOC, did he sign an authorisation for the tapping of GSOC’s phones?”

Mooney: “Well I thought it was very noteworthy that Simon O’Brien refused to ask him that particular question.”

Mooney: “Because he gave evidence to that..”

Niall Collins: “He said that in the committee last week.”

Browne: “That he didn’t ask if his phone was tapped?”

Collins: “He was asked that question at the committee by Clare Daly…”

Mooney: “And he said he chose not to ask the minister that particular question. I think Simon O’Brien is an English police officer who may be suffering from disbelief at the way these matters are dealt with in this country.”

A statement will be issued within the hour. 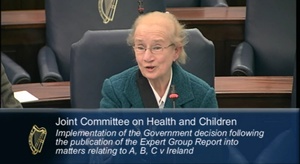 This is what she told them.

Judge Catherine McGuinness “Doctors are not asking to be allowed to abort children who perhaps are suffering from Downs Syndrome or something like that, it’s not about that. It’s about questioning, the timing and when the child is already destined to death in the womb and that is still, I think it’s highly doubtful what the law will be.

Professor [William] Binchy [Pro-life campaigner who had spoken earlier] has said that if we’re going to do this, we’re going to have no requirement for due care for the child. I don’t believe that legislators are going to bring in laws that would approach it in an uncaring manner like that.

That can be dealt with in the regulations. And, in the end, when we look at the values of Irish society, and whether you’re going to change them, I think that you understand that what I’m saying is that our values are considerably more subtle than you might think, when you look at, overall, what we do about life as opposed to what is a sort of ideal, which we’ve said before is and then when we come up to the human dilemma, what do we really do about it?

And I would say that, I really do plead with you not to be too affected by a kind of bullying approach, or, from either side of the question, from either the ultra liberal who are depicted as pro-abortion or from the extreme, what describes themselves as pro-life, who are trying to narrow the law, and think about where the middle ground is and what the main, majority of your constituents feel.”

Earlier: So Why ARE Women With Non-Viable Pregnancies Being Forced To Travel To The UK?