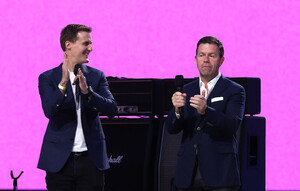 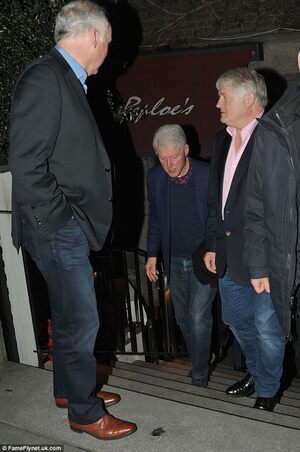 The FBI has been investigating the Clinton Foundation for months, reviving a probe that was dialed back during the 2016 campaign amid tensions between Justice Department prosecutors and FBI agents about the politically charged case, according to people familiar with the matter.

The inquiry resumed about a year ago. Agents are now trying to determine if any donations made to the foundation were linked to official acts when Hillary Clinton was secretary of state from 2009 to 2013, these people said. The people did not identify what specific donations or interactions agents are scrutinizing.

FBI has been investigating the Clinton Foundation for months (Washington Post)

Denis O’Brien and his mobile-phone company Digicel have contributed between $10m aand $25m.

Before Christmas, John Fitzpatrick, chairman of the Ireland America Fund, appeared on the Marian Finucane Show on RTÈ Radio One, where he discussed his friendship with the Clintons and the foundation.

Marian Finucane: “You’ve been to the White House as you say for over the 20 odd years, remind me how you got to know Hillary Clinton and how you got involved with her and remind me in turn how that impinges, say, on Trump.”

John Fitzpatrick: “Yeah I was very lucky that first visit or maybe it was the second visit to the White House, it was the time that Hillary Clinton was first lady and there were rumours that she was going to run for the Senate and I remember being there and just going up to her and then I said ‘First lady I hear you are running for Senate and she said I am indeed and I said well my name is John Fitzpatrick I have a hotel in New York and I’m sure you’re looking for the Irish-American vote and she said I am indeed so I handed her my bus card there and then and said get someone to call me I’ll do a fundraiser. I had about 10 seconds with her at that stage and she walked by and I remember some Irish person behind me saying ‘Only you, Fitz, would hand your business card to the First Lady.’ So a few days later I got a call from Huma Abedin who we all know is her right hand person and still there…”

Finucane: “Is she still there?”

Fitzpatrick: “She is. I was out with Huma there about a month ago having diner because she’s going through tough times with her ex husband and they came down to my house himself and her son and she’s great she’s helping Hillary now on her book launch and she’s travelling round the country she’s still with her that’s with the Clintons they’re loyal to the people and Huma is so loyal to her too so I think they’ll be together for a while, you know.”

Finucane: “Yeah funnily enough we had Leo Varadkar in earlier and we were talking about loyalty and where it can take you and if you take Hillary Cllinton and her loyalty to her husband’s foundation it kind of got her into the trouble that led to the ‘lock her up’ syndrome.”

Fitzpatrick: “Yeah, I think this campaign was a very unique one because of Donald Trump. I mean There were no rules no boundaries the President as he is now feels he can say what he likes and deal with the consequences after where as most politicians will be very careful about what they say, what they said about the foundation. I thought what he said was a little bit unfair but it was his smear, it was his campaign to get people thinking was there something wrong with the foundation. The foundation is a very strong foundation and the Clintons have supported so many organisations all around the world that I think it’s a very good foundation still.”

Finucane: “And you do fundraise for them still?”

Fitzpatrick: “I did, yes, the President was in Ireland just about a months ago to get an honorary degree from an Irish university and myself and Denis O’Brien co-hosted a dinner in my house down in Ashford for him, it was a small group and we just did it kind of as a sign of respect for him and to raise some money because as I said it’s a great organisation.” 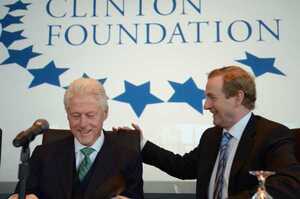