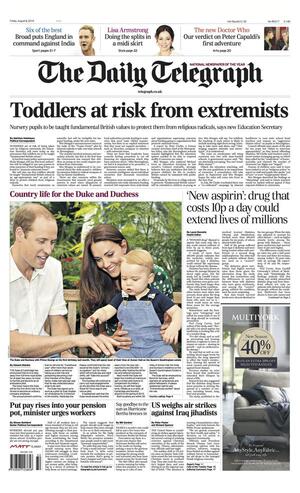 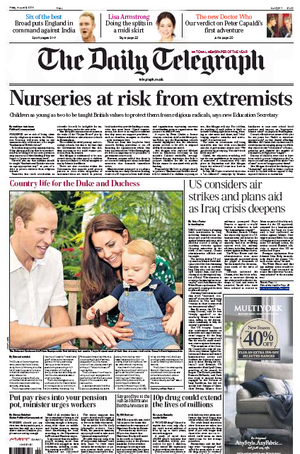 The Telegraph updated its first edition. But I wonder which will be delivered to Kensington Palace this morning? pic.twitter.com/0qg9INzn7L

The first edition of the Daily Telegraph (top) and the updated edition (below).

By George, I think they nearly got away with it. 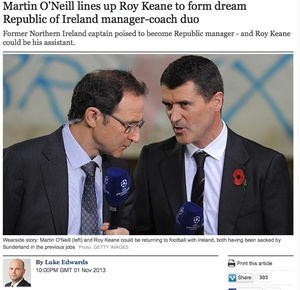 @27KHV so why are you making such a big deal about it? It’s just a small bit of detail in the final paragraph of a 400 word story.

We’re sorry for mistakenly describing the fantastic boxer Katie Taylor as British in our London 2012 section today. She is Irish, of course. 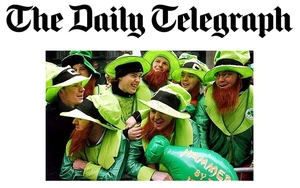 A scuffle started in the local one Friday night. Words were exchanged, then insults and finally blows. Bottles, glasses, people, flew through the air and Casey ended up being hit in the face by a sharp piece of glass which cut off his nose.

‘Stick his nose back on and hold it with your hand,’ ordered McGinty. ‘And we’ll get him to the hospital.’

Out into the street they flew to be greeted by sheets of rain pelting down.

Quickly they bundled the injured man along and into the casualty department.

‘Will he live?’ inquired the boys.

‘Was it loss of blood?’ asked Finbar.

‘No, he drowned. You put his nose on upside down,’ sighed the doc.

Murphy had asked Casey for the hand of his daughter in wedlock.

‘And can you support a family?’ asked Casey.

‘I think so,’ replied Murphy.

‘Well. There’s six of us, you know,’ said the future father-in-law.