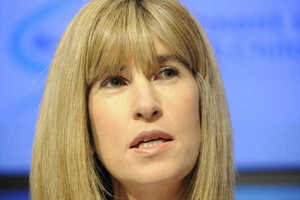 Earlier, on RTÉ Radio One’s Today with Seán O’Rourke, Seán introduced an item on surrogacy with the following:

Seán O’Rourke: “And that’s Helen Hayes speaking last month about surrogacy. Now after that interview went out we received a call from Breda O’Brien of the Iona Institute expressing concerns about surrogacy. She’s with me now in studio and in our Cork studio, I’m joined by Dr Deirdre Madden, senior lecturer in Medical Law at University College Cork.”

Dr Deirdre Madden: “Thus far, there has been no indication that children born through this means [surrogacy] have experienced any psychological problems. I do acknowledge when they do reach adolescence or when they are older that issue may arise. But as I say, for the moment the results are very positive.

Breda O’Brien: “But Deirdre you know those studies have tiny sample numbers, some of them are self-reporting by parents. It’s the parent’s estimation of the difficulties or otherwise of the children.”

Madden: “But this also Breda was introducing the children’s teachers in school and other adult figures in their lives.”

Madden: “I think it is very paternalistic to suggest that women would not be able to enter into this sort of arrangement with full and voluntary consent.”

O’Brien: “In fact, it’s maternalistic. It’s the desire that women would be protected in the situation and the children be protected as well.”

Madden: “Most women don’t actually feel that the children that they’re carrying are their children, particularly but not only where the child is the full genetic child of the intended parents.”

O’Brien: “So you’re thinking of women as vessels then?”

Madden: “No. I’m saying that the women themselves do not consider the child they’re carrying to be theirs.”

Madden: “That’s not how they consider it. They consider that they’re giving a wonderful gift to this infertile couple.”

O’Brien: “Which they are but at what price and at what cost and is it not better to follow the example of other European countries? You’re never going to get rid of it completely but you can send out a very strong cultural message that this is not the thing to do.”

Not Breda’s first or probably last time to debate an expert on Radio One.