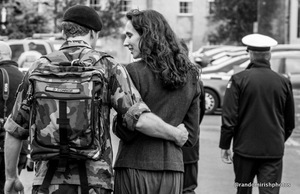 The homecoming was witnessed by Random Irish Photos.

Of their time in Sierra Leone, Captain Eugene O’Connor said:

‘We were all spread out all over the country, so we all have different experiences. Obviously there is a degree of poverty there and a degree of fear with the virus But that was something that was on our minds all the time.

‘When we arrived in country, there was a spike in cases And there was always a concern that it was going to spiral out of control.We were pressed into immediate areas of hot spots quite quickly. Between all the agencies, they managed to get a hold and stymie the outbreak at that stage. So within about a month, cases began to level off and so they are almost at zero but it’s a bumpy road. It never just goes 360 cases to zero.’

This is my buddy, James Nunan, from Blackrock, who’s been volunteering with King’s College Hospital in London to help with the ebola crisis. This is a video of him outside a hospital in Sierra Leone. It’s pretty interesting/worrying…particularly the reality of the hospital screening tent. I asked what happens in the screening tent. He said, “They just die in the tent. They just get water and that’s it. If they get in the isolation unit they get drugs and a bed.”

“I just saw this Halloween costume titled “Ebola Victim”! I am at a loss for words at how stupid and insensitive this is. I have a feeling this one may get as out of hand as the Twin Tower Sisters a couple of years ago. Had to be shared…

@rtenews Man on a flight back from Italy has made an Ebola threat by writing 'Be careful, Ebola" on a coffee cup. Plane on tarmac in Dublin. A drill to check the National Isolation Unit’s  response to a possible Ebola infection case.

During the excercise streets around the Mater Hospital were cordoned off including Berkley Road,  (above).

Good of the RNLI to help out in fairness. Dramatic Scenes following the transport of a woman from her home in Tyrrelstown, Dublin to the Mater Hospital with symptoms apparently consistent with ebola.

“Gardai and ambulance crews shut down Berkeley Road in a suspected Ebola case. The HSE has since confirmed the lady was tested for the deadly virus, though was given the all-clear. Witnesses reported that ambulance crew, and other staff wore protective gear throughout the investigation. Large areas surrounding the hospital were shut-down in accordance with procedures outlined by Health Minister…”

Leo Varadkar: “It is reasonable that healthcare workers are concerned about risk of transmission to them of Ebola.” (1/2)

Varadkar: “It is unlikely but possible. For this reason We are further stepping up preparedness.” (2/2) — Sarah Bardon (@SarahBardon) October 16, 2014

Senator Ronan Mullen has called on the Health Minister to appear before the Seanad next week.

He has “serious concerns about deficiencies in HSE guidance and protocols” and wants HSE staff to be able to wear personal protective equipment and be fully trained in the treatment of Ebola.

He also said “it is the Government’s responsibility to assure the public that all necessary steps are being taken“. He highlighted the contrast in measures at British airports and at Irish ones.