And fronting the DUP float at next year’s Pride … pic.twitter.com/YiwNzuycdK

That’s a right quare fleg ye have there, sister.

NI Health Minister Edwin Poots has defended his opposition to gay adoption and gay men donating blood in the Assembly today. Mr Poots denied he thought homosexuality was an illness, but said there were heterosexual men “who would desire lots of other folks. Those of us who are married shouldn’t be doing that. People can resist urges. And in terms of all of this I would just encourage people to take a sensible and rational view of these issues.”

“When it comes to adoption I’ve just come from an MLU, a Midwifery Lead Unit in Lagan Valley today and all of the people that were giving birth in that unit were women and all of those women would not have been impregnated by another woman.

Previously: The Abominable No Man

NI Health Minister Edwin Poots has failed in his attempt to challenge the British Supreme Court’s ruling to grant adoption to gay couples in Northern Ireland. Currently, a single gay or lesbian person can adopt in Northern Ireland but a couple in a civil partnership cannot.

The Health Minister has also tried to prevent gay people from becoming blood donors. An online petition calling for his resignation currently has almost 8,500 signatures. 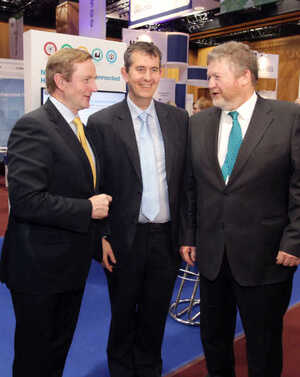 The [Northern Ireland] health minister is set to take his fight against the extension of adoption rights to Northern Ireland’s gay and unmarried couples to the UK’s highest court.

Edwin Poots has been given leave by the Court of Appeal to appeal a ruling that the current ban on gay and lesbian couples adopting is unlawful.

…At present, a single gay or lesbian person can adopt children in NI, but a couple in a civil partnership cannot. The Human Rights Commission (NIHRC) said the ruling would bring NI into line with the rest of the UK.

Rainbow Project director, John O’Doherty said they were disappointed with the minister’s decision. “Both the High Court and the Court of Appeal have noted the practice of banning same-sex and unmarried couples from adopting is discriminatory,” he said. “Enough public money has been spent on this fool’s errand. The minister should focus his time on ensuring the best available homes for children in care in Northern Ireland.”