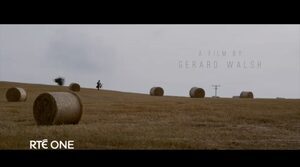 On RTÉ One, on Sunday morning.

Director Gerard Walsh, who also brought you A Day Like Today, Is This It?, and Bound, writes:

I directed a feature film and it will get its television premier this Sunday on RTE one. The only problem is, we have no marketing budget and we need as much help getting people to watch/record it.

It’s on at 1.25am on Sunday morning, so that really doesn’t help.

The film was made on a shoestring budget, we managed to get it in cinemas and travel the world with festival screenings.

We dont know if RTÉ have an advert for South just yet, so we created one  (above) in the meantime.

Dont forget, set your boxes to remind and record, it only takes two minutes.

You may recall a previous post featuring a trailer for Gerard Walsh’s first feature film A Day Like Today, about a woman with marriage difficulties who meets a homeless man and spends the day with him

“Shot on a micro budget of just €500 all around Dublin City we are going to be donating all of the first month’s revenue generated from VOD [Vimeo on demand] to Action Autism Ireland.”

Then you may wish to catch this.

By Gerard Walsh who also brought you Is This It? and Bound.

The feature film – which was shot in eight days with €400 – follows the lives of Joe, a homeless man with a troubled past and Alice, a wife with problems at home, who spend a day together.

A Day Like Today will be screened tomorrow at the Galway Film Fleadh at 6pm in the Town Hall studio.

Tickets for €10 can be bought here