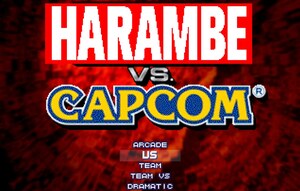 Presenting for your consideration: Harambe vs. Capcom, a fan-made 2D fighting game for Windows.

In which Harambe, being possessed of telekinetic powers, is the target of shadowy international assassins, and stages his death at Cleveland Zoo in order to buy enough time to get to the bottom of the whole intrigue, taking on the cast of Street Fighter II and III along the way, among others.

Game of the year competitor, surely.