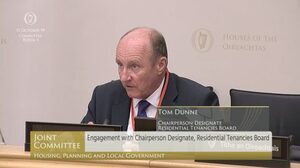 At a meeting of the housing committee.

Chairman designate of the Residential Tenancies Board Tom Dunne referred to accidental landlords as “very vulnerable as a class of people”.

The chairman designate of the Residential Tenancies Board has said the fear of difficult tenants is one of the reasons why “accidental” landlords are getting out of the market.

Speaking to the Oireachtas Housing Committee, Tom Dunne said some landlords are “vulnerable” and he said they need support.

He said many are “accidental” landlords who might not be aware of the risks associated with being a landlord.

Mr Dunne said many do not have the money to carry out repairs and he said many landlords were “vulnerable”.

Mr Dunne later mentioned, in response to a question from Cork Solidarity–People Before Profit TD Mick Barry, that he’s never personally been either a tenant or a landlord.

In order for the building control system to be fully independent we have called for a Building Control and Consumer Protection Agency. It would work with local authorities to ensure consistency in application of building and fire safety regulations.

It would conduct research, hold the industry register and the BCMS. It would also deal with complaints and provide information for the public concerned about possible latent defects.

Alongside the new agency, the committee recommended significant changes to SI9. We felt strongly that the link between the certifiers and the developer/builder must be broken.

The report also proposes a package of measures to ensure greater protection for homebuyers, including mandatory latent defects insurance and legislative reforms including transferable warranties and longer statues of limitations.

There was also a strong feeling in the committee that the State must accept its responsibility for the failures of the past. Priory Hall was only possible in the context of a badly designed and poorly reassured building control regime.

A more comprehensive redress scheme for those affected by historic defects must be put in place and our report outlined a number of possible funding options that could underpin such a scheme.

A meeting of the Oireachtas Committee on Housing and Homelessness today

The committee will be fully aware that there are in excess of 6,000 people in homelessness across Ireland, of whom 2,000 are children. In addition to the family homeless emergency there over 3,000 adults with no dependents in homeless services nationally.

Individuals, and indeed couples, face enormous challenges in accessing housing. The people that Peter McVerry Trust supports can often be excluded by mainstream social housing providers. Inadequate housing provision and housing supports mean that it is single individuals who face the longest wait for housing and the greatest risk of damage and institutionalisation by the system.

Despite the deepening emergency across Ireland there are only 5 counties where there are more than 100 people in homelessness.

However, the situation is shifting dramatically. For example, in Kildare the numbers in homelessness has doubled since January 1st.  In Tipperary the figure has gone from 4 individuals to 54 individuals in just 3 months. In Dublin there are, on average, 8 new adult presentations per day.

From the Peter McVerry Trust’s opening statement to the Oireachtas Committee on Housing and Homelessness this morning.

Read the statement in full here