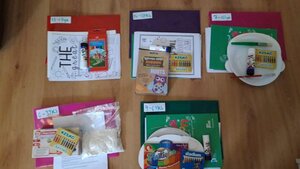 Art packs we’ve put together for children and teenagers in our Family Hubs.

Art is one of the ways we’re trying to create a positive atmosphere for families in our services during the Covid-19 pandemic. 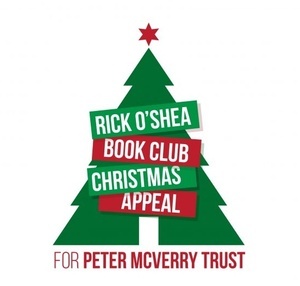 Rick O’Shea, whose Book Club currently has 28,000 members and who starts as the new presenter of the RTÉ Radio 1 Book Show on December 8, writes:

Last year The Rick O’Shea Book Club Christmas Appeal raised over €51,000 in aid of the Peter McVerry Trust’s work helping those who need the most help in the middle of Ireland’s homelessness crisis.

This year I want us to raise even more so here’s what you can do:Donate the price of an average second hand book – €5.

We start now and the appeal closes on New Year’s Eve. 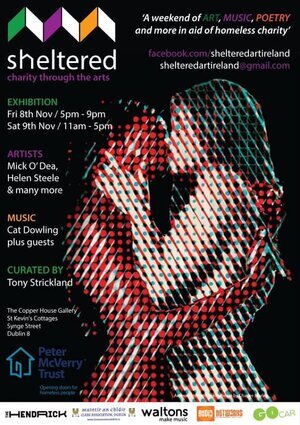 Tonight, from 5pm until 9pm, and tomorrow night, from 11am until 5pm.

At the Copper House Gallery in Dublin 8.

The ‘Sheltered Charity Through The Arts’ exhibition, in aid of the Peter McVerry Trust, will be taking place, to wit:

“Our aim is to raise awareness and much needed funds to help combat adult homelessness and families in crisis in Ireland.

“The event is free and will bring together a collective of established and up-and-coming artists to showcase their work and auction pieces of art. We will also host an online auction.

“In addition to the art, there will be musicians, poets, spoken word and guest speakers over the two days, with an after party taking place at the Hendrick Hotel in Smithfield on the final night.”

Sheltered Charity Through The Arts 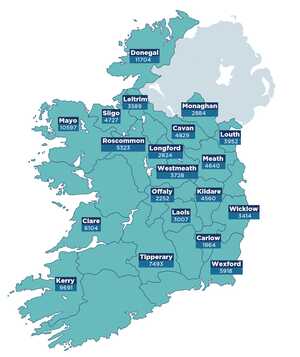 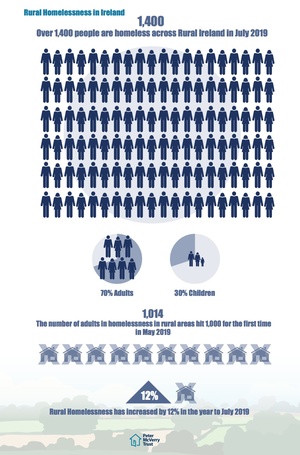 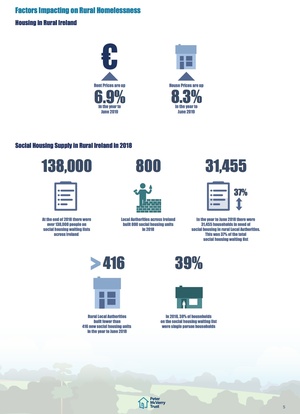 As of April 2019, there were 40,234 mortgages across Ireland in long-term mortgage arrears (two years or more).

According to information published each year by the Central Bank, rural counties have the highest percentage of mortgages in arrears as a percentage of all mortgages.

We have 22,000 members in the @ROSBookClub. I’m asking them, and you, to help in some small way in the homelessness crisis.

This is our first ever Xmas Appeal. Please donate the price of a cheap paperback book, just €5, to help the @PMVTrust. Thanks xhttps://t.co/RdRsHUAe2g

Here’s your first @ROSBookClub Xmas Appeal update of the day :-)

We started on Tue with the aim of raising €5,000 for @PMVTrust by Xmas.

Please give what you can or RT if you can’t :-)https://t.co/RdRsHUAe2g

A week ago, on Monday, November 12, RTÉ Gold presenter Rick O’Shea asked members of his book club to donate the price of a cheap paperback book, €5, to housing and homeless charity, the Peter McVerry Trust.

Now he’s calling on corporations and companies to contribute, saying:

“I’d love companies and corporates to consider giving a tiny something at this time of year on top of all of the members of the public digging deep. Your fiver will make such a difference to the number of people they can help on cold, dark Irish streets this Christmas.” 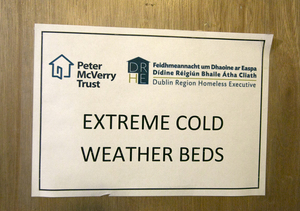 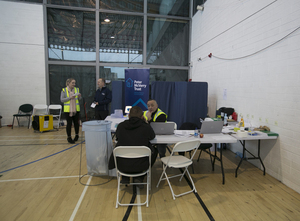 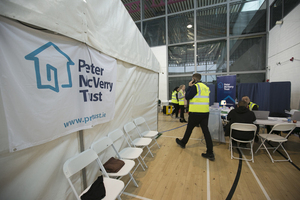 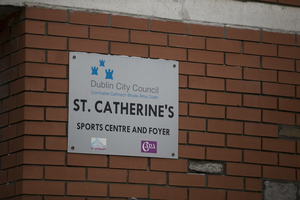 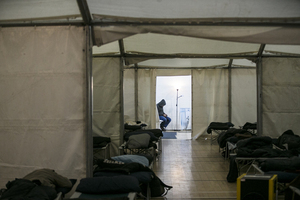 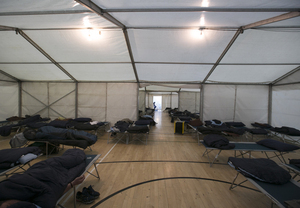 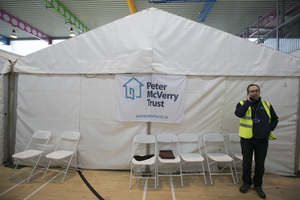 Tents filled with emergency beds for homeless people set up in St Catherine’s Community Sports Centre by the Peter McVerry Trust, which are “almost at capacity”, according to the charity. 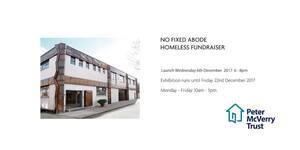 A stocking filler with a difference.

In The Copper House Gallery, we are holding a special Christmas launch on Wednesday, December 6 to encourage people to come along and support the great and essential work of The Peter McVerry Trust by buying an original piece of art.

Over 120 artists have donated their pieces to the exhibition and 100% of the proceeds go to The Peter McVerry Trust. All the works are priced to sell with some well known names. There is a style and a price range to suit everyone so this year why not give the gift of original art?

You can check a name off your Christmas list, support original Irish artists and raise funds that go directly to combat the escalating homelessness crisis. If you can make it to the launch on the 6th December, you can do it all with a Christmas beverage in hand! 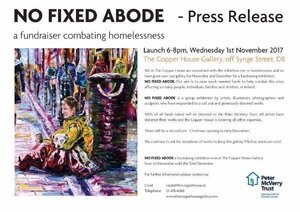 No Fixed Abode is a group exhibition of donated homeless-themed works by artists, illustrators, photographers and sculptures in aid of the Peter McVerry Trust. 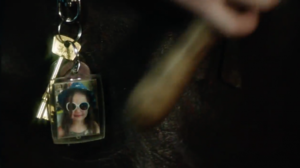 A one-minute cinema ad for the Peter McVerry Trust in collaboration with Wide Eye Media, IAPI, Pull the Trigger and Havas Dublin.

On Wednesday night, at 8.56pm, a three-minute ad of the same vein will be broadcast simultaneously on RTE One and RTE Two.

Laura Halpin and Ronán Jennings, of Havas Dublin, wrote the script; it was directed by Kieron J Whelan and it involved Oscar winning director Lenny Abrahamson. 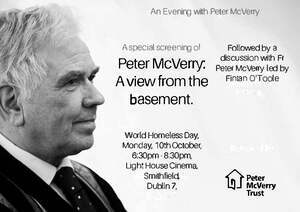 An evening with homelessness activist Peter McVerry’ including a screening of the documentary Peter McVerry: A View From The Basement and a chat with Fintan O’Toole at the Light House Cinema starting at 6.30pm. 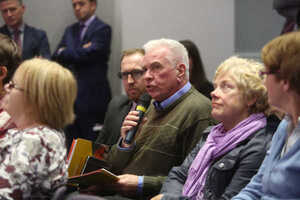 ….Fr Peter McVerry wants to get back to the 80s, where we were building up to 8,000 “social houses” every year. Why? Does he see home ownership as a bad thing? Why else would he be so in favour of inflating the “social housing” market – property that would forever remain in the state’s hands?

The British Left never forgave Thatcher for “right to buy,” which allowed the low income to buy their council houses. Private property being the original sin of the Left, this broke the chains that bound many of Britain’s poorer with the powerful state. US broadcaster Dennis Prager says “the bigger the state, the smaller the citizen,” and that’s what gets Leftists votes.

We entirely sympathise with people on short-term leases, who can see a hike in their rent down the road. But what do you expect with such an appallingly regulated sector? Landlords are only in that favourable position due to that tired but true term: supply-and-demand.

If the stock of housing were to keep up with demand, no landlord could afford to lose good, reliable tenants; longer-term leases, with rent freezes, would be a competitive advantage as landlords sought the best tenants. (And, given that we rate tradesmen, teachers and restaurants online, why not throw in a website that rates tenants?)

The market rate is, after all, contingent on what the state will allow it to be, reflective of land zoning, planning permission, and a plethora of costly regulations.

Alas, I dare say, many of McVerry’s supporters would be the same type of people who would turn their noses up at a block of apartments being built in their neighbourhood.

Of course McVerry is correct on many points; relative to wages, housing is stupidly expensive in Ireland. But the solutions are not so forthcoming.

Releasing state-controlled land; building taller buildings to make better use of acreage and afford us the density of population required to make quality public transport possible; tackling the cost of grossly inflated agricultural land – all of these solutions are actively fought by progressives.

You can’t have a competitive property market and an 19th Century idyll at the same time, folks.

We need sustainable solutions here. We need tough, open discussions. We need accurate figures. McVerry’s is not the only voice in this debate.

Fr Peter McVerry’s voice is not the only one in this homelessness debate (John Lalor, The Hibernia Forum)