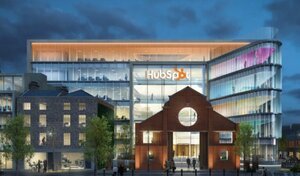 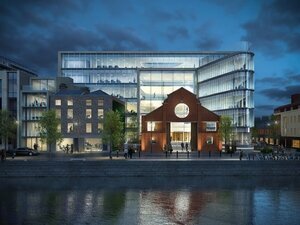 HubSpot HQ at 1, Sir John Rogerson Quay, Dublin 2 and (top) as it would have looked under proposals

HubSpot submitted an application seeking approval to install four new signs at the site including an “illuminated acrylic sign at high level” and a “logo sculpture” at the entrance courtyard.

Planners ordered that HubSpot must submit a conservation method statement or written report that outlines the “rationale and justification of the development” and also explains how the project has been designed ”to have regard to the character of the main dwelling, which is a protected structure”.

HubSpot is not the first multinational to encounter problems with city planners over signage. Last year, Fora reported that job search giant Indeed had been locked in a fight with the council over an eight-foot illuminated sign at its St Stephen’s Green offices. 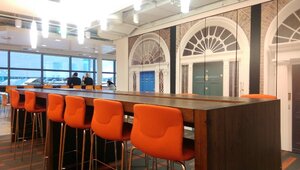 Today we launched HubSpot Dublin’s (or, as we like to call it, DubSpot’s) brand new office! There’s still some construction going on but I know you’ve published pics on AirBnb‘s and Google’s offices before so I thought you might want to check out HubSpot’s new office: We’ve only been able to publicly post photos since this morning. Bar and gym are included also and we’re hiring 320 people over the next couple of years…