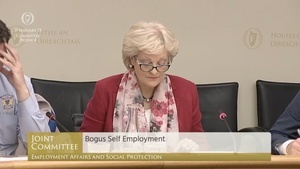 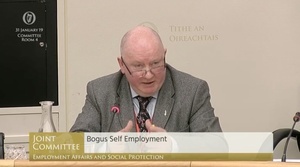 Patricia King gives rough figures of what could be lost to state in Revenue in construction as result of bogus self-employment – €240 million a year in PRSI and tax. Neither Department of Social Protection or Revenue gives any indication of caring much.

At a meeting of the Joint Oireachtas Committee on Employment Affairs and Social Protection.

General Secretary of the Irish Congress of Trade Unions Patricia King (top) and the general secretary of the National Union of Journalists Seamus Dooley (above) addressed the matter of bogus self-employment.

Talks with State broadcaster RTÉ in relation to the employment status of more than 100 of its contractors have been “tortuous and extremely difficult”, the National Union of Journalists has said.

Séamus Dooley, the union’s general secretary, was giving evidence to the joint Oireachtas committee on employment affairs and social protection in relation to “bogus self employment” on Thursday.

Bogus self-employment occurs when workers who should be classified as employees are marked as self-employed, which can lead to benefits for employers who otherwise would have to pay PRSI and sick pay.

RTÉ last year agreed to review the employment status of 106 contractors after an independent report by law firm Eversheds Sutherland found that they have “attributes akin to employment”.

Mr Dooley said he would be meeting with senior management at RTÉ on Friday in relation to the matter. He described the period since the review by Eversheds Sutherland as “tortuous and extremely difficult”.

“I have spent more time in Montrose than any human being should be required to do,” he said, before criticising the culture of media “personalities” that are treated differently to other staff.

Previously: ‘I Don’t Want To Make Employers The Bad Guy’

Watch back here and here

Today at the employment Committee @irishcongress renewed its call for the enactment of new laws, like those contained in the @labour Bill which passed Second Stage last year to #EndBogusSelfEmployment. The govt’s softly-softly approach is allowing dodgy employers off the hook pic.twitter.com/nIw3TgSgzV 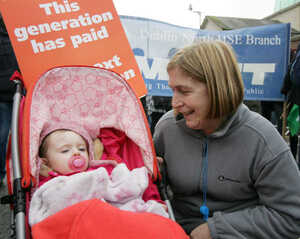 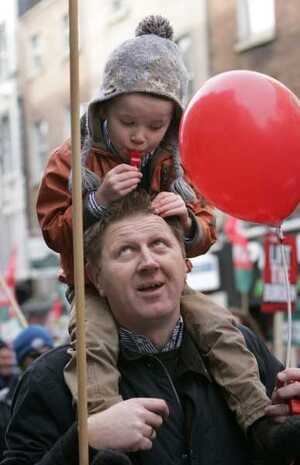 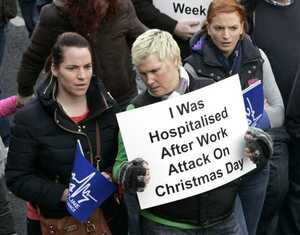 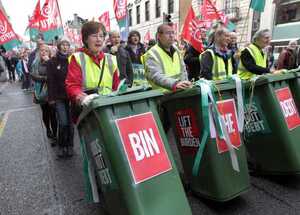 Some of the esitmated 20,000 protestors taking part in this afternoon’s ‘Lift The Burden of Debt’ march in Dublin city organised by the Irish Congress of Trade Unions…including Ellie (18 months). A national protest called by the Irish Congress of Trade Unions today. a) Unwilling to listen to fat cats talking about the lack of cat food?

Previously: Did You Go? The austerity measures being imposed on the country are causing unnecessary suffering and have no purpose because the programme itself is failing, the Irish Congress of Trade Unions (Ictu) has told the European Commission.

In a letter sent to István Székely, the European Union representative on the troika of the EU, European Central Bank and International Monetary Fund, Ictu general secretary David Begg said Ireland would not quickly or easily recover from the scarring effects of structural unemployment or the breaking up of families as a result of emigration.

He said Ictu believed jobs were “the central economic objective and that this should be the guiding light on the road back to fiscal prudence rather than the deficit reduction being the main objective”.

But…but, how can he say that?

Enda’s getting an award and everything…. Members of The United left Alliance lobbying members of the Irish Congress of Trade Unions to vote no in the fiscal compact treaty referendum this morning in Parnell Square, Dublin (including, top, ICTU economist Paul Sweeney and, second pic, Seamus Dooley, head of the NUJ).