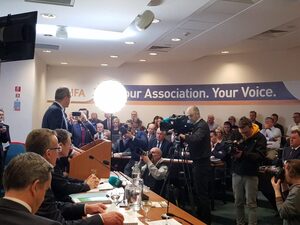 Micheál Martin gets applause from @IFAmedia Council members as he says “We can’t be prescriptive about what people eat, that’s a dangerous trend which is emerging” he adds “people can’t be brow beat into what to eat” #GE2020 @rtenews

Responding to @HaroldKingston1 Martin re-affirms that FF policy does not support the reduction of the suckler herd & says Government’s BEAM scheme was a “sleveen way of reducing the herd” #GE2020 pic.twitter.com/C11HI3vcSj

Last night, during the RTÉ Leaders’ Debate, a man in the audience asked the leaders what they would do, if in Government, in relation to the proposed reduction of the national suckler herd.

Taoiseach Leo Varadkar said Fine Gael does not support reducing the national herd and said “that’s not part of our policy”.

He said there are other ways to reduce agricultural emissions.

He said beef farmers have had a very hard time and they often feel they are being “climate shamed” and “blamed for climate change”.

Mr Varadkar added: “I think that’s wrong. And I think that should stop.”

Green Party leader Eamon Ryan said he believed the current agriculture system in Ireland is not serving Irish farmers. Instead, he said it’s serving the “big beef processors” and retailers.

He said the Green Party would support a smaller suckler herd while supporting alternative income streams for farmers.

Asked if he specifically agreed with the herd being reduced by 53 per cent, as suggested by Climate Change Advisory Council, Mr Ryan said:

“And at the same time, farmers’ income increase 53 per cent. That’s the change we need to make, so our farmers are better off by spending less, by delivering a product that we get a premium from here and abroad.”

A clear commitment by @MichealMartinTD that if elected into Government, live exports will be maintained by @fiannafailparty #GE2020 #yourassociationyourvoice pic.twitter.com/7tB1ovpN4D 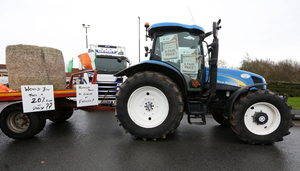 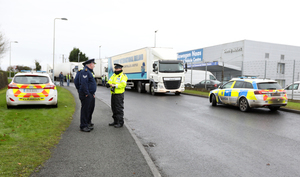 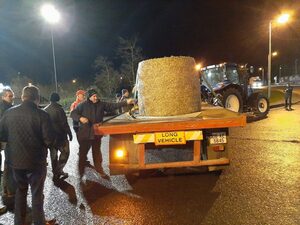 Semi-formal tallymen in the Castleknock Hotel this afternoon doing their thing. Tallying mainly. What is their beef?

We have literally no idea.

But we know a newspaper [The Irish Farmers Journal] that might.

Why are beef farmers protesting?

irish Farmers Journal: The simple answer is they are unhappy with the price being paid to them by beef processing factories.Recent analysis by Teagasc shows that farmers need a base price of at least €4.00/kg to be profitable. In the last week of October, farmers were receiving a base price of €3.65/kg for steers and €3.70/kg to €3.75/kg for heifers from beef factories. This means they are producing animals for slaughter below the cost of production.

When did the beef crisis start?

Beef prices began to slip from above €4 mark in late 2013. The problem became most acutely obvious in January of this year when factories began to impose penalties on carcases that were out of spec.

How does the Irish situation compare with the UK?

The difference between the beef price paid in the Republic of Ireland and the UK has reached a 10-year high.Take for example an R4 steer carcase weighing 360kg. Bord Bia analysis shows the UK farmer is being paid €369, or €1.03/kg more than the Irish farmer.

Why are beef farmers selling “out-of-spec” cattle though?

Factories insist their retail clients want beef animals finished at certain carcase weights so that beef cuts fit neatly into the plastic trays that we are familiar with seeing on supermarket shelves. Generally, price penalties can be imposed on carcases that are considered to be too big, i.e. carcases that weigh over 400kg, and therefore not within specification. The specifications over recent years have not changed. However, whether factories impose price penalties on “out-of-spec” carcases has.
It is clear that once cattle numbers increased, processors used carcase specifications as tools to reduce the prices paid for cattle, simply by adhering more strictly to the specifications and introducing a range of price penalties that were not previously imposed. For example, cattle aged over 30 months were penalised with a lower base price.
In most factories, price penalties of 10c/kg are being imposed, (a lot of price penalties are now being wavered such is the demand – carcase limits of 400kg are now gone to 430kg in some plants while others are not imposing right up to 470kg and even 500kg in places) along with the 12c/kg loss in bonus under Bord Bia’s Quality assurance scheme.
Take for example a 420kg carcase: If price penalties aren’t imposed by the factory (which has been the case largely during 2013), at current prices, €1,533 would be paid to the farmer. If penalties are imposed for that carcase being overweight, then €1,440 is paid to the farmer – a price cut of €93. It came as a big surprise to many farmers earlier this year that factories were imposing penalties for out-of-spec carcases.

The IFA have vowed that they will take more action from next week onwards if beef prices do not begin to rise.Meanwhile, Minister for Agriculture Simon Coveney has convened another “beef forum” meeting involving all stakeholders in the beef sector for November 12. Minister Coveney has said he expects significant progress to be made on the market price and specification issues in advance of this meeting.With prices rising in the UK by 30c/kg in the last few weeks, it will take a similar price rise here to appease farmers.