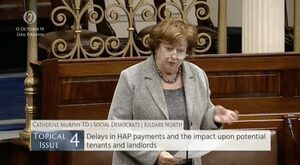 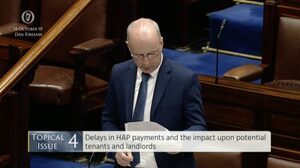 During the Topic Issue Debate, Social Democrats co-leader and Kildare North TD Catherine Murphy raised her concerns about delays facing people trying to access their Housing Assistance Payment and the implications of these delays.

Housing Minister Eoghan Murphy wasn’t able to be present for her contribution but Minister of State at the Department of Health with special responsibility for Mental Health and Older People Jim Daly responded to Ms Murphy.

Ms Murphy claimed some people are facing a nine-week delay in getting their HAP application processed.

“I want to focus on is a serious problem that seems to have dramatically worsened in the past two or three months, namely, the delay in having a HAP application processed.

“This in addition to the lack of flexibility shown in cases where rents are very high and the HAP is not sufficient to cover them, meaning people have to try to source accommodation in a very limited sector.

“In the past few months, the delay in processing an application has become dramatically worse and now averages nine weeks.

“One can find a situation where a family will find a landlord who will accept the HAP. However, when they get the contracts and present the application they are told the process will take nine weeks.

Several people have told me they have been told to pay the rent in the interim. Who, in his or her right mind, would say that? If people had several thousand euro in their bank account, they would not be looking for a housing assistance payment.

“It is absolutely mad. These people do not have money to pay rent in the interim. The delay has got dramatically worse.

“Another major concern I hear expressed all the time is that when people borrow the money they do not feel secure about getting the money back because they will have demonstrated an ability to pay it. This issue is adding to the stress.

“Landlords are also left in limbo because they do not know, if they have accommodated somebody with HAP, that the payment will be processed. It would be enormously helpful if a letter was sent out confirming that people are approved.

“I speak to a number of estate agents, and I had cause to speak to one particular letting agent, who I know is very good at sourcing accommodation and encouraging landlords to take HAP tenants.

“He spoke about having very good experiences and not having an issue. However, he feels he has been left with egg on face because he recommended HAP but it is taking so long to process it that landlords are coming back to him saying they are uncertain they will get paid.

“It is perfectly legitimate and legal for a landlord to evict somebody in that scenario.

“The letting agent told me that once a property is advertised in the north Kildare-west Dublin area, he expects to receive 150 or 160 emails within 24 hours, of which 70% would be from HAP tenants.

“The remaining 30% of applicants have the best chance of securing that accommodation if the landlord knows he or she will have to wait nine or ten weeks to have the HAP payment processed.

“I have come across several cases where people who have been told to leave accommodation subsequently find other accommodation and then have to reapply for HAP.

“When we ring the office in Limerick we are told the reason for the delay is that a large number of additional applications have been received.

“Is there a large number of additional applications? Is the problem a shortage of money or a staffing issue? What is causing the problem because the situation is chaotic at the moment?“

Mr Daly responded to Ms Murphy by explaining how the HAP system works before saying:

“Limerick City and County Council provide a highly effective transactional shared service on behalf of all HAP local authorities and manages all HAP related rental transactions for the tenant, local authority and landlord.

“On average, HAP applications are processed by the HAP Shared Services Centre within two working days of receipt.

“Any rental payment arising for a given month will then be made to a landlord on the last Wednesday of that month.”

Ms Murphy told Mr Daly to ring the Limerick office and warned him that she believes his information is “wrong”.

“What is in his [Mr Daly’s] reply does not match in any way the experience of the applicants. That information must be out of date.

“It is not fair on applicants to put them in this situation. If their applications were being processed within two days I would not be on my feet raising this issue.

“I would not have queues of people coming into my office in tears totally stressed out by this. This is also not fair on landlords who are being left in a precarious position. It is not fair all round.

“Regarding the timelines the Minister of State mentioned, it can take up to two months, and mostly it does, to process a housing application.

“It can take another eight or nine weeks to process a HAP application. What is happening is potentially adding to the homeless crisis.

“The way HAP is being applied is problematic. In some local authorities the uplift of the 20% for a person who is in a homeless situation is not being applied. From my experience of its application in Kildare, it has been very patchy.

“The delays in HAP payments are sending the message to landlords that they should stay away from this scheme.

“That is not the message that needs to be delivered when we know people are already in a precarious position in terms of security of accommodation.

“I ask the Minister of State to check the facts he has put on the record because they do not align with the experience of people with whom I have been dealing and the situation has dramatically disimproved during the past few months.

“I believe the information in the reply is wrong.” 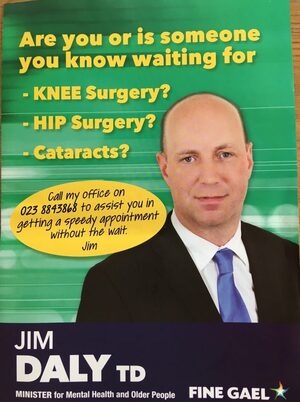 Is this even legal? 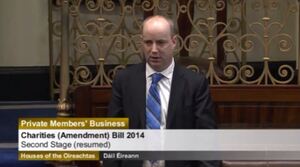