Former Defence Forces member Lisa Smith, who is facing trial accused of ISIS membership, has been granted bail with strict conditions including an internet and social media ban.

The former soldier, who left Ireland and married after she converted to Islam, was located in a Syrian refugee camp, and after a trek to Turkey with her two-year-old daughter, she was brought back to Ireland on 1 December.

However, on arrival she was arrested and questioned for three days before she was charged with being a member of the middle-eastern terror group. 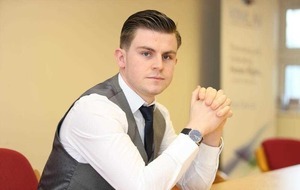 Audrey Carville: “You represent Lisa Smith. Are you satisfied so far how her arrest and her questioning has been handled by the gardai?”

Darragh Mackin: “It’s a very, very early stage in the investigation. However, at this stage, we are satisfied and Lisa has co-operated fully with the gardai like she co-operated with the Turkish authorities beforehand and the FBI before that.

“So we are satisfied that the investigation is progressing at a reasonable speed. We hope to bring matters to conclusion as quickly as possible.”

Carville: “Are you expecting a file to go to the DPP?”

Mackin: “At this stage, it is too early to tell. However, one thing is clear and has been clear from the various interviews that Lisa has given. Lisa has categorically denied involvement in any terrorist offence or terrorist organisation.

“As many will be aware, or maybe unaware, for people to publicly remove or disassociate themselves from ISIS in itself, is unprecedented and unheard of, especially for someone who’s in a camp at that particular time.

“So we are of the view that the evidence of the State is inherently weak. And it does not point to terrorist offences and, as such, we believe that Lisa has a very, very strong case to make and is currently making that case.”

Carville: “But Islamic State is a terrorist organisation and she admitted to joining it, did she not?”

Mackin: “Unfortunately, it’s not as clear as that and as many people may not be aware, the process of radicalisation is inherently focused on religious beliefs.

“And unfortunately in this day and age, and has been the case for many year, that there are extremist organisations who target particular people, vulnerable people on religious beliefs, to try and move them to certain areas.

“And we must be clear: like the word Islamic State is not necessarily a direct link to ISIS. Of course there are all those connotations, however, the underlying and unfortunately deep political or religious background to the term Islamic State goes right back to people with particular beliefs as to what they believe to be a euphoria or a euphoric place.

“So the term Islamic State unfortunately and must be considered against that backdrop, it does not mean and it certainly, as is Lisa’s case and has been Lisa’s case from the first interview, that term does not mean that she was a member of ISIS.”

Carville: “Let’s hear her in her own words. Here she is talking to journalist Norma Costello who interviewed her for RTÉ News back in July. And during the course of that interview, she said very clearly, she had joined Islamic State but she also said very clearly that she did not fight for them.”

Plays clip from interview, in which Ms Smith said:

“I’m telling you myself. I didn’t fight.

“What did I do? I just joined the Islamic State and now I’ve become a monster? How? Like, you know? There’s many people… the British and the Irish fought for many, many, many years, you know? If someone from England moved to Ireland what would they say about them? You know? Or the opposite? From any country, you know what I mean like?

“How am I monster? I came here to Islamic State and I didn’t do anything.”

Carville: “‘I just joined Islamic State and now I’ve become a monster’. Those were the words of Lisa Smith back in July. Islamic State again a terror organisation, a prescribed organisation. So membership of it is illegal, surely?”

Mackin: “No unfortunately that isn’t strictly correct. This must be looked at against the actual…it is correct to say that the political connotations in this side of the world and particular what we understand Islamic State to be directly linked with Isis. That is correct.

Carville: “Does she no longer then pledge allegiance to the Caliphate and all that Islamic State aimed for in its ideologies?”

Mackin: “Well I think it’s clear from the interview that she gave, like I said, from the camp itself, that she does not pledge allegiance to the terrorist organisation Isis. Nowhere did she pledge her allegiance or become involved, that was her case publicly.

“And that public interview must be looked at in the context. That interview was given at a time when she was currently detained in a camp. In that camp it was well known, and has been well documented, that those women who spoke out, or in anyway disassociated themselves from the [inaudible] then of Isis, were subject to threats, to raping, to torture, etc.

“And the reality is that even that in itself is inherently unprecedented.”

Carville: “But there were also allegations Darragh Mackin, made by young women in Tunisia, that Lisa Smith helped to train them in the use of weapons. There were also suggestions, in general, that wives of Islamic State fighters, which Lisa Smith was, helped to procure other women for sexual assault and exploitation.

“Now did she engage in any of that?”

Mackin: “That’s hearsay in itself, because there has been not one witness statement, not one witness who has come forward and who has actually suggested that that took place, that that occurred. And therefore, until such times, and witnesses come forward, or witness statements are produced, it is merely that. They’re mere allegations of hearsay without any foundation or basis.

“And if you looked at the interview closely, when that is put to Lisa, her response is ‘bring those people to me and let them say it to me and I’ll say that never happened’. And those people aren’t produced. The position is that that is inherently unreliable.”

Carville: “We will leave it there for now. Thank you very much indeed. Darragh Mackin who represents Lisa Smith.” Only the long lens capture of Lisa Smith at Dublin Airport by Eamonn Farrell, of Rollingnews. The Turkish Airlines plane carrying Lisa Smith lands and Ms Smith leaves the aircraft with a pink blankie over her head (or gaily-coloured burqa – we may never know) before being ‘nicked’.