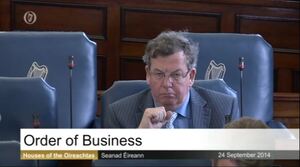 And he’s not going to take this anymore.

Seagull loathing Senator Ned O’Sullivan (FF) raised the issue of anonymous online commenters and their criticism of politicians in the Seanad this morning.

He singled out list-loving, palatially housed online news Godzilla The Journal saying its comments section often verged on the “abusive”. He then called for a civilised debate to be held on the matter. 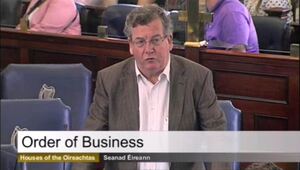 Senator Ned O’Sullivan (Fianna Fáil) raised the issue of seagulls this morning in the chamber.

Well I have nothing against pigeons. I can take or leave pigeons but I’m very much against seagulls. And eh I think something needs to be done here to address the seagull problem in this city. People may have been listening to Joe Duffy about it there last week. It seems the seagulls have lost the run of themselves completely. I know the apartment block I live in it’s impossible to get a night’s sleep.

…They’re very raucous. They’re keeping people awake. I saw that they’re getting so cheeky now that they attack young children and dispossess them of their lollipops and stuff like that. It might be funny to many people but it’s a serious issue in the city. They’re not seagulls, they really are vermin. They’re scavenger gulls, dump gulls….

..So I’m saying the Minister for the Environment should look at that in a serious manner. It might be funny but if you listen to the details on the radio show you’ll learn that it’s anything but.

THE GULL MENACE IN FIGURES: pic.twitter.com/lC9JRk8TtM