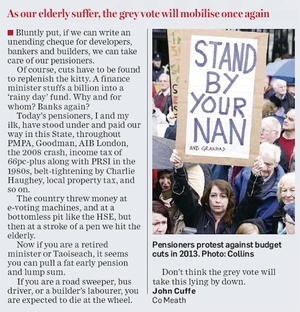 Revealed: Politicians will still qualify for pensions at 65… while most workers wait until they’re 68 (Independent.ie) 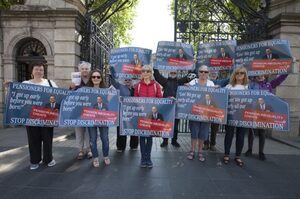 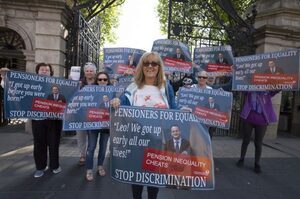 People Before Profit TD Brid Smith (top second left) alongside ‘Pensioners for Equality’ protesting outside the Dáil  calling on the Minister for Social Welfare, Leo Varadkar to end the “systemic inequality in the contributory pension and the homemaker scheme”.

Lilian MacCarthy (above centre) from Rialto in Dublin has over 30 years of contributions, but is looking at a reduction of 24 Euro per week. 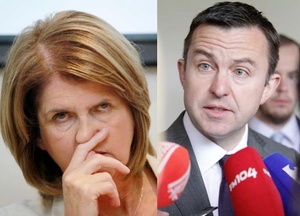 Minister for Social Protection Joan Burton last night admonished Minister for State at the Department of Finance Brian Hayes for suggesting that she examine the need to target “well-off” pensioners.

There were strong hints last night that Ms Burton will resist any moves to target pensioners. “Ms Burton will make her views known to her colleagues in Cabinet in the lead-in to the budget. She greatly values the services her department provides to pensioners,” said a spokeswoman.

Mr Hayes, in an interview with The Irish Times on Saturday, had said the political system needed to overcome its reluctance to impose any cutbacks on older people. He pointed out that many were comparatively well off and did not have mortgages. 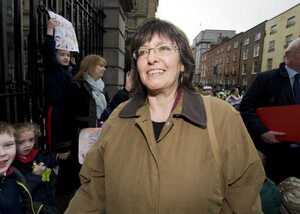 Addressing the Oireachtas Finance Committee, Josephine Feehily (above), said they had caused confusion and distress to some people, and she was extremely sorry for that.

However, Ms Feehily insisted the Revenue only wants to collect the correct amount of tax – no more, and no less.

Ms Feehily said they had to “move quickly” when they became aware that a large number of pensioners had either not declared their State pension or had under-reported it.

She said the Revenue had to correct the situation for the current tax year, and the lack of time became their “undoing”.

She said they were not able to implement changes with the standard of service they would have liked, and again apologised for that. 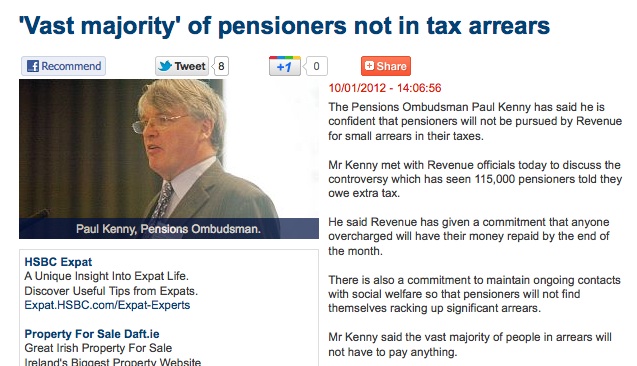 Call it a u-turn.

How do they do it?

‘Vast majority’ Of Pensioners Not In Tax Arrears (BreakingNews.ie) 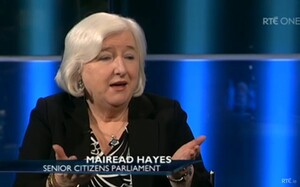 Mairead Hayes of the Senior Citizens Parliament explained to RTE 1’s  Frontline last night how some of her her members (both living and dead) were targeted by the revenue.

Mairead Hayes: “The situations is, what people are saying to us is: ‘I rang the Revenue. They told me immediately I don’t owe anything. So I’m happy, but I’m telling you because it would be interesting to know how many people are going to eventually pay.’
“There are some people who are telling us that there’s a particular point when a spouse goes over 66 that people are due to pay money. And I think we have about six letters on file where people went into Revenue, told them, got their refund for that year and then the next year, I don’t know if you’re aware but there were no letters, there were no certs sent out in 2009 and 2010 because of an efficiency programme. So most people didn’t get this tax cert.
“What happened was if you went to a tax advisor and asked them, they would advise you ‘go and ask Revenue for a cert’ but if you were an ordinary Joe Soap who didn’t do that, what effectively happened was, it appears, that they reverted back to your old figure even though you had given them the new figure. So it seems that the people who pay the refund don’t talk to the people who issue the certs. Now, as well as that, I have to say, and this is very sad, but I know of two people who were bereaved in 2011 and they got letters.”

Pat Kenny: “Even though they have been in receipt of a State burial ground or something like that.”

Hayes: “Yes a State bereavement ground and their pension payment was cut off after six weeks.”

Kenny: “So one arm of Government knew very well that they were bereaved…”

Kenny: “…and somehow the other arm of Government, even though the computers were talking to each other, they didn’t know.”

Revenue officials admitted they will hit 15,000 people who have small occupational pensions with a higher tax bill.

But the tax hit will only be temporary because these people are exempt.

That means the taxman will take the money — for a while — and then return it to the pensioners.

The bizarre decision raises serious questions about Revenue’s handling of what has now become a fiasco.

However, the reality for thousands of elderly people now is confusion and a sense of alienation, according to Pensions Ombudsman Paul Kenny.

Pensioners Told To Pay Tax They Do Not Owe (Charlie Weston, Irish Independent) 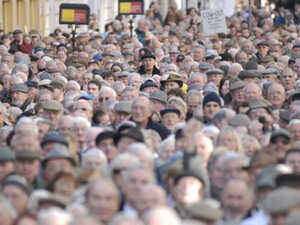 UP TO 20,000 calls from concerned pensioners have been received by the Revenue Commissioners since help lines on their potential tax liabilities were established last Friday.

Letters from the Revenue were sent to 150,000 pensioners last week about their tax compliance, with 115,000 being told they will have to pay extra tax this year.

Minister for Jobs Richard Bruton admitted the move by the Revenue Commissioners to send letters to pensioners last week had created confusion.

Pensions Ombudsman Paul Kenny has said it was ‘disturbing’ that people who were not liable for any extra tax on pension income had received letters about the issue.

Senior Revenue officials are expected to be questioned at an Oireachtas Committee this week about their handling of the issue. 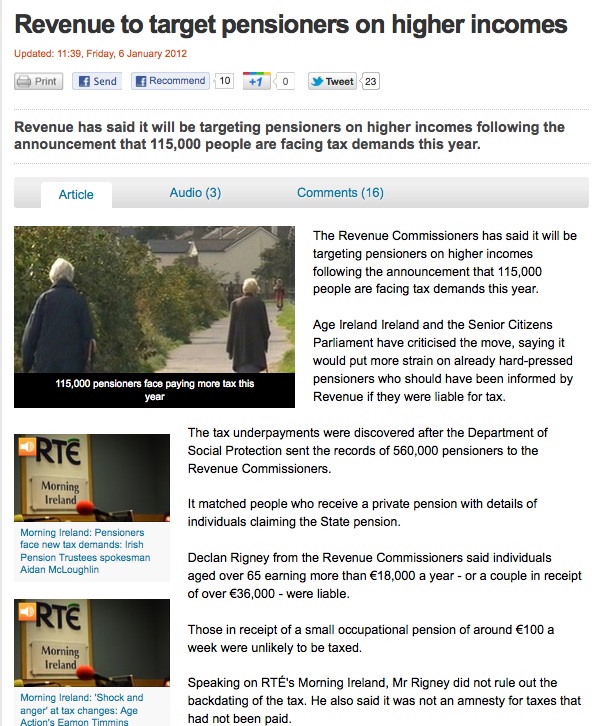 This is going to be interesting.

Earlier: We All Partied 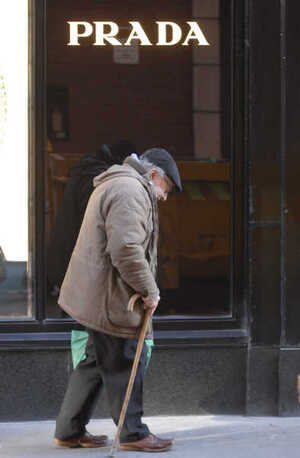 The Revenue has not ruled out the backdating of tax following the announcement that over 100,000 pensioners are facing tax demands from the Revenue this year.