A haiku for every element of the Periodic Table? ‘Science communicator’ and PhD student Jamie Gallagher maps where the scientists who discovered the various elements of the Periodic Table were living when they discovered them. Talking to Smart News, Gallagher sez;

One of my favourites has to be polonium, though, the first element to be discovered by Marie and Pierre Curie. They were working in a modified shed with substances so dangerously radioactive their notes are still too active to be handled safely. Working together they isolated this element and later named it Polonium after Marie’s home country. (A country, I may add, that turned her away from her pursuit of education as she was a politically interested female). It was her hope that by naming the element after Poland she could generate interested in the independence (from Germany) campaign for the country. Yet [in my periodic table] the victory comes in under the French flag where the work was carried out. It remains to this day the only element to be named after a political cause, and a wonderful tribute to a phenomenal woman. 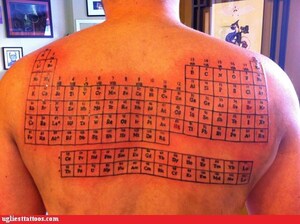 In this latest installment of the Periodic Table of Videos series on YouTube, the charming Professor Poliakoff of the University of Nottingham’s nanotechnology center celebrates his birthday by having a periodic table etched onto one of his signature silvery hairs.

The completed table is fewer than 90 microns across.