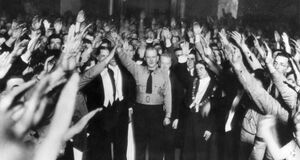 We are for the Ireland that rolls
laughing out of its bed every morning, those
whose national anthem is the alarm
clock exploding on the bedside locker and it still dark;

who, even August bank holidays, are
in the shed before five a.m.
fashioning origami former Garda
commissioners, or writing violin concertos in praise
of the Little Sisters of the Bon Viveur,
Blessed K.T. Whittaker and anyone else
who got up ridiculously early
to make this country what it
allegedly isn’t.

We represent those who know should they fall
up a ladder, or for some other reason –
be it insanity or baldness –
be unable to properly function,
we in government will do nothing
except, if they’re lucky, repeatedly
knee them in the nasty bits.

We whose ancestors have eaten
the still throbbing heart of General O’Duffy
(or at least what we thought was his heart)
now see leaflets tumbling through respectable letter boxes
in which cretin and comedian crow their gutless song,
their arguments a bladder bloated with animal blood.

We say, down the disposal pipe
with all these and their cries
of avarice and failure,
those who engage in wilful wastage of water
by sitting there all day – the jets
fizzing up their crevices –
in Jacuzzis given them
by the tax payer.

Drown them in the tank
and bill them for their own extinction,
for they are weasels who’d drink
of your chickens until they’re dry.

We are for people who look both ways twice
when crossing the road
and remember where they left their keys. 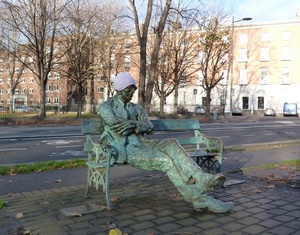 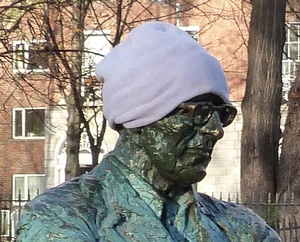