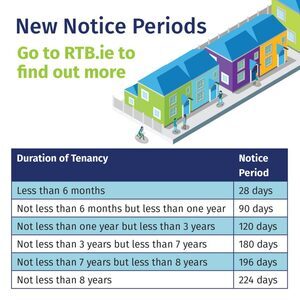 Changes to the legislation effective from 4th June 2019 have extended notice periods which a landlord must provide to a tenant when serving them with a notice of termination.

The Residential Tenancies Board (RTB) is recruiting eight staff to crack down on dodgy rentals….

Each Authorised Officer will be responsible for their own caseload and for delivery of specific areas of the Unit’s Work Plan. Candidates will be appointed at the first point of the salary scale: Engineer Grade II, €60,967… 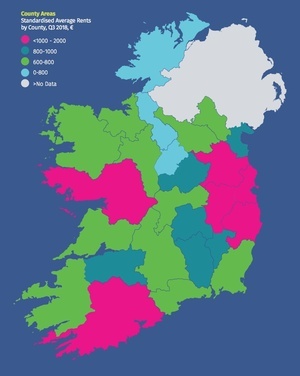 Average rents by county in the third quarter of 2018, according to the Residential Tenancies Board (RTB)

…Amid continuing unprecedented demand, the national average rent rose to €1,122 during the quarter, up 7% on the same period last year.

But a moderation in that pace of growth is also evident, with rental price inflation dropping to 1.9% compared to the previous quarter when it was 3.6%.

In Dublin, the rate of increase was higher than the national picture at almost 9%, bringing the average rent in the capital to €1,620.

The index also found that areas designated as Rent Pressure Zones are seeing a slower pace of rent inflation for people who already have a tenancy.

However, one concern for the future is that the number of landlords is falling, despite high rental prices and record demand.

This report, jointly produced by RTB and the ESRI [The Economic and Social Research Institute], is controversial. Ireland’s #1 landlord Kennedy Wilson (which has leapfrogged #2 IRES), disputes the figures and I agree with KW, the figures appear to be based on new tenancies only.

The report has been released for previous quarters, timed to boost Eoghan Murphy’s political status (eg published day after vote of no confidence, published on day Eoghan visited the ploughing championship to announce policy changes etc), this is the earliest the report has been published. It appears to have been given in advance to the Irish Times only… 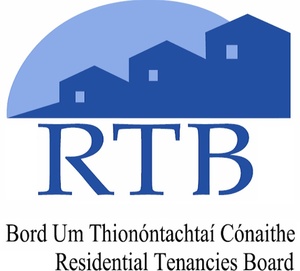 I saw your post about the tiny bedsit in D8 and I decided to check if it was registered with the Residential Tenancies Board (RTB)..

It turned out that the property was registered in 2013. Registrations lasts for four years, so it is expired right now.

Following the expiration of registration, the RTB will send a letter to the landlord reminding them to renew it, if they intended to rent the property out again.

When I asked the RTB person what could be done about this, he said that unless I was the tenant, I couldn’t raise an enforcement claim through the RTB.

And if I was a tenant, would I raise this issue? I don’t think so. Especially when I could be given 28 days notice to quit for any reason in the first 6 months of tenancy.

I have checked other properties listed on Daft before, and they too were not listed with the RTB, but it seems crazy to me that properties can be advertised without meeting the minimum of being a registered property. (Never mind meeting minimum standards, but sin scéal eile.)

No wonder the Government can’t give accurate housing figures when they don’t even know what’s being rented.