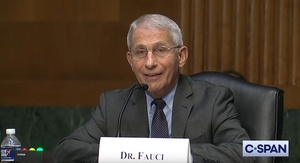 From top: US Chief Medical Advisor Dr Anthony Fauci, Sir Jeremy Farrer, director of the Wellcome Trust and a former member of SAGE

Sir Jeremy Farrar, an advisor to SAGE – UK’s NPHET -, who publicly denounced the theory that a lab leak was the ‘likely’ origin of Covid as a ‘conspiracy’, admitted in a private email in February 2020 that a ‘likely explanation’ was that the virus was man-made.

In an email, sent to American health chiefs Dr Anthony Fauci and Dr Francis Collins, Sir Jeremy said it was possible Covid had been evolved from a Sars-like virus in the lab. He went on that this seemingly benign process may have ‘accidentally created a virus primed for rapid transmission between humans’.

But the British scientist was shut down by his counterparts in the US who warned further debate about the origins of the virus could damage ‘international harmony’.

He was told by other scientists with links to virus manipulation research that it could cause ‘unnecessary harm to science in general and science in China in particular’.

Sir Jeremy claimed in his emails that other respected scientists also believed the virus could not have emerged naturally. Names included Professor Mike Farzan, the Harvard researcher who first discovered how the original Sars virus binds to human cells.

Despite his concerns, Sir Jeremy went on to sign letters in The Lancet a fortnight later denouncing anyone who believed in the lab leak theory as bigoted.

It was only a matter of thyme.