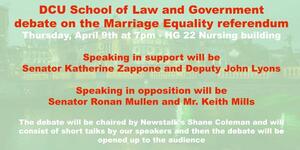 “Been chatting to a few friends who attended the debate on same sex marriage in DCU last night. What was said to me was that there was a comment made by the No side which appeared to say that they would attack the Yes side through saying the government is trying to change the meaning of gender through the wording of the same sex marriage referendum. Can anyone shed any light on this?”