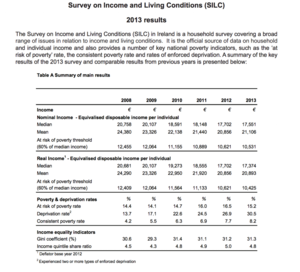 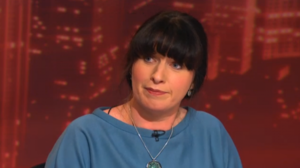 A graph and table from yesterday’s Central Statistics Office survey on income and living conditions in Ireland and Michelle Murphy, from Social Justice Ireland on Tonight With Vincent Browne last night

– One in eight children is living in poverty.

– 60% of those children is living in consistent poverty.

– As a whole, consistent poverty has doubled since 2008.

– If Ireland didn’t have social welfare, half the population would receive below €10,425 per year.

Vincent Browne: “The median income is the income that the person in the middle of society has, so it gives a far better reflection. And the median income is €33, 469 and we conduct public debate in this country as though everyone is living off of €50,000 and over. This isn’t true. And I just think half the population are living on..sorry, this is household income now, household income…of less than that.”