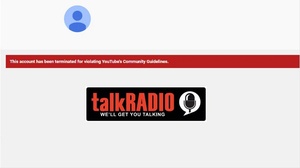 YouTube has removed UK’s talkRADIO’s channel from its platform apparently on the grounds of breaching Covid-19 content guidelines.

The London-based station broadcasts a live stream from its studio on its YouTube channel and regularly feature guests who have questioned the official covid narrative.

A spokesperson for talkRADIO said:

“We urgently await a detailed response from Google/YouTube about the nature of the breach that has led to our channel being removed from its platform.

“talkRADIO is an Ofcom licensed and regulated broadcaster and has robust editorial controls in place, taking care to balance debate. We regularly interrogate government data and we have controls in place, use verifiable sources and give space to a careful selection of voices and opinions.”

The tech giant has yet to respond to Press Gazette’s request for an explanation about why the channel has been deleted and what the process was which led to this action.