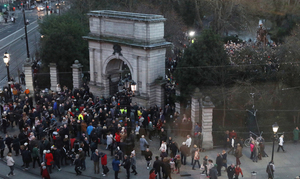 Hundreds bid farewell to The Haunting Soldier, the First World War sculpture on loan to Dublin City from its British owner to mark the 100th anniversary of  the armistice agreement that ended the war. The sculpture, which was  was vandalised with red paint last week, will be dismantled today.

Previously: The Haunting Soldier on Broadsheet The clean up this morning. To counter the controversial 6 meter high statue of a British Soldier errected in Stephens Green, Irish Socialist Republicans have errected a series of large A1 posters around the Dublin City park that read, ‘Ireland Welcomes the Black and Tans- Murders, Rapists, Criminals, Terrorists!’

The posters have been errected to demonstrate opposition to the shameful glorification of Imperialist War and the slavish celebration of the British Military that the statue represents, a force that continues to maintain an illegal occupation of Ireland and is involved in illegal wars of conqest around the world.

Monday: ‘We Shall Not Sleep, Though Poppies Grow’