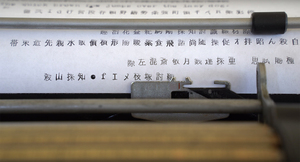 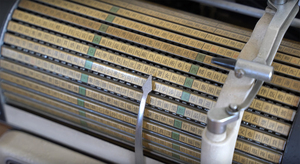 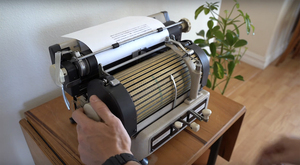 Behold: a rare 1940 index typewriter, the Toshiba BW-2112 – demonstrated here by New Orleans based Typewriter Collector – which uses horizontal cylinders with thousands of symbols to type in Japanese, Chinese and English.

In the mid 50s, when Toshiba switched to a Western style keyboard with Kana characters, the cylinder models were discontinued, making this a rare machine indeed. Of the device, which ordered characters in a manner similar to that found in a Japanese dictionary, Typewriter Collector sez:

They’re arranged phonetically by most common “on-yomi” (or kun-yomi in some cases) according to the kana syllabary (many homophones, of course)… Red characters help parse the readings. Last character to left of equal sign can be pronounced “kin” (exert) and the first character in next row “gin” (silver), then “ku” (suffer) in red followed by “kuu” (sky, empty), “kuma” (bear), “kun” (teachings, meaning [also the kun in kun-yomi]), “gun” (group), then “kei” (system) in red followed many, homophones of “kei”